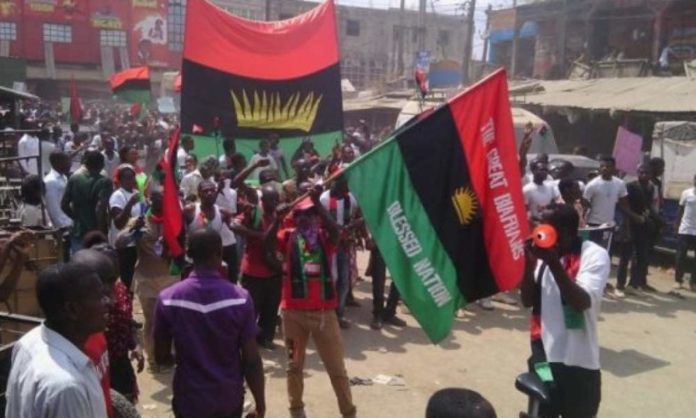 The Indigenous People of Biafra (IPOB) has called on apex Igbo socio-cultural organisation, Ohanaeze Ndigbo, and politicians in the South East to stop the fruitless begging northerners to support an Igbo candidate for president in 2023.

Rather than begging, the group called for a synegy to restore Biafra nation.

IPOB, in a statement by its spokesperson, Emma Powerful also cautioned politicians using their leader, Nnamdi Kanu, as negotiating point to get political positions for themselves to think twice.

He maintained that the Igbo leaders rather should support the agitation for a Biafra nation instead of begging for the Presidency position, which he noted can never be granted to them.

‘We want to make it categorically clear to desperate Igbo politicians, both elders and self-acclaimed leaders, that IPOB under Mazi Nnamdi Kanu is not looking for any Nigerian president of Igbo extraction under the present contraption called Nigeria.

‘Again, IPOB will never be a party to their begging and fawning for a transient political office at the detriment of our freedom. They must understand that our singular concern is the unconditional release of our leader Mazi Nnamdi Kanu. If our elders think they can use IPOB and Nnamdi Kanu to bargain their ways into political office, then they are in for the shock of their lives.

‘Some self-appointed Igbo leaders desperate for power in 2023 should refrain from making unguarded utterances that make the entire Igbo race a laughing stock by northerners. It makes no sense to be desperate over the power shift in 2023 while illustrious Igbo son, Mazi Nnamdi Kanu, is still in detention.

‘IPOB members that died did not die because of Igbo President of Nigeria. What we need at this very point in time is the unconditional release of our Leader Mazi Nnamdi Kanu.

‘It is better Igbo politicians, businessmen, elders, traditional rulers, religious leaders and acclaimed leaders including Ohanaeze Ndigbo should retrace their steps and carry themselves with dignity at all times.

‘They must realise that the Northern oligarchy and the Fulani cabal controlling Nigeria will never allow or support any Igbo man to become President of Nigeria. It doesn’t matter how such a stooge wish to please them, they have bitterness against the Igbo. So, it’s better they focus on fighting for Biafra restoration.

‘Any bargains against this divine mandate will not succeed. We call on Igbo politicians, elders and traditional rulers including Ohanaeze Ndigbo to come back; there is no road in that path they are toeing,’ Powerful stated.