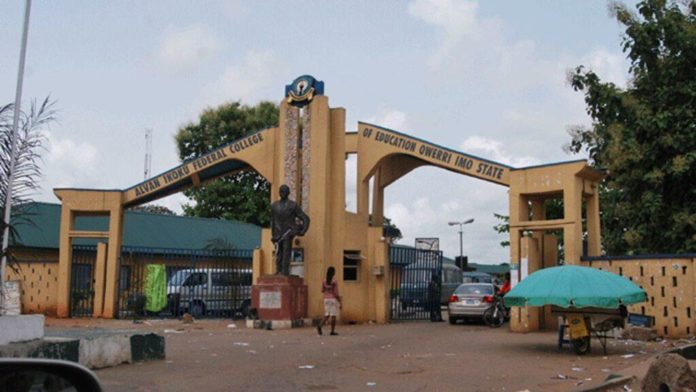 Palpable fear has enveloped female students of Alvan Ikoku Federal College of Education, Owerri, Imo State, over the rape of a final year student of the institution.

A student of the college, who pleaded anonymity told newsmen yesterday that a final year student of the institution (name withheld) was raped by a hoodlum about 3a.m., yesterday in Hostel F.

The victim was said to be of the Department of Political Science.

The source said the rapist had access the room through the window and threatened to stab the two females in the room if they raised the alarm.

The hostel windows are said to be without burglary, while some of them are completely open.

According to the source, while the hoodlum raped the final year student, the other student out of fear, only began shouting after the departure of the rapist

Her shout woke other students, who insisted that the hostel door must be opened.

The students, it was learnt, thereafter, proceeded to the school gate chanting songs of anger and disenchantment until dawn. The victim was reportedly rushed to a hospital

The Eastern Updates gathered that a first-year student of the college was raped in like manner last month.

A student said: ‘The students here are really suffering, this is not the first time a student would be raped in the hostel. A first year student, whom I learnt was a virgin, was raped last month. Now, another student has been raped.

‘How can female students of a tertiary institution be living in hostels without burglary. Some of the windows are just open.

‘The management of the college is not doing anything about it. This is wickedness. For about two months now, we struggle to get water to bath. There is also the issue of light. The Federal Government should intervene to save our lives. Nobody knows who will be the next victim.’