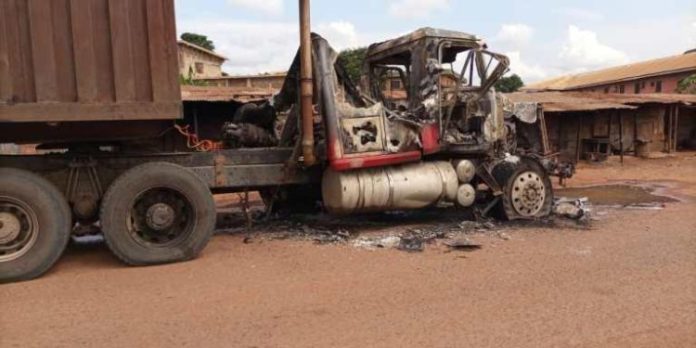 A trailer and a provision shop was on Thursday burnt by hoodlums allegedly enforcing the sit-at-home order declared by the Indigenous People of Biafra (IPOB).

The trailer belonging to Chisco company was set ablaze at Eke-Obinagu suburb along Enugu – Abakaliki Expressway in Enugu East Council Area of the state.

The Eastern Updates gathered that the truck which was said to be heading to Abakaliki was attacked and set ablaze in the early hours of Thursday. However, the driver was said to have escaped unhurt.

A shop said to be stocked with provisions was totally razed down to ashes in the same Emene area of the state capital.

It was observed that over 10 security operatives led by the police had been stationed at the scene to ensure that the goods in the container weren’t looted.

The Eastern Updates gathered roads and streets in the state were deserted as residents observed the sit-at-home order.