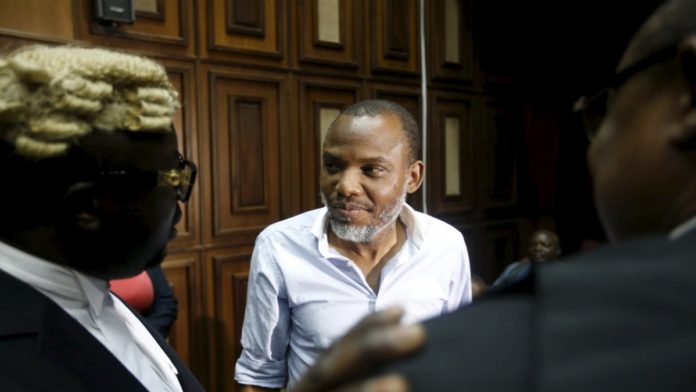 Ahead of Thursday’s trial of the leader of the Indigenous People of Biafra (IPOB), Nnamdi Kanu, the Movement for the Actualisation of the Sovereign State of Biafra (MASSOB) has warned the Federal Government not to fail to produce him in court.

It said Kanu’s absence in court would bring devastating destruction to Nigeria as “it will be a proof of evidence that he has been killed in DSS detention cage. Nigeria government should know what it means and the follow-up reaction if Nnamdi Kanu is denied his physical appearance in the court.”

The group’s leader, Uchenna Madu, in a statement, yesterday, said MASSOB is fully backing the civil disobedience call by IPOB directing people in the South East to sit-at-home any day Kanu would be brought to court.

‘In the spirit of Biafranism and brotherhood among pro-Biafra agitators, we have declared full support for the call for civil disobedience and total economic and social lockdown against Nigeria state for the release of Mazi Nnamdi Kanu.

‘In the spirit of collaboration and for Biafra sake, MASSOB will engage positively in every step, programme and activity that will effect the release of Mazi Nnamdi Kanu.

‘We support other moves that draw Biafra closer to actualization. We shall continue to collaborate and partner with every positive move and step that will effect the release of our other comrades in different Nigeria prisons mostly in Awka and Onitsha detention camps.’

Madu explained that the call for closure of markets, public/private motor parks, schools and other public business premises was voluntary, adding that it is a mark of respect and love for Igbo land and the detained IPOB leader.

‘MASSOB, IPOB and other pro-Biafra groups will not molest, compel or intimidate anybody to observe the stay-at-home exercise as all our members shall stay indoors, there shall be no physical demonstration, street march, procession or any other public functions tomorrow in Biafra land.’

Condemning the heavy presence of security forces especially the military in parts of South East since Monday this week, MASSOB said those were signs of military jittery, fear and cowardice.