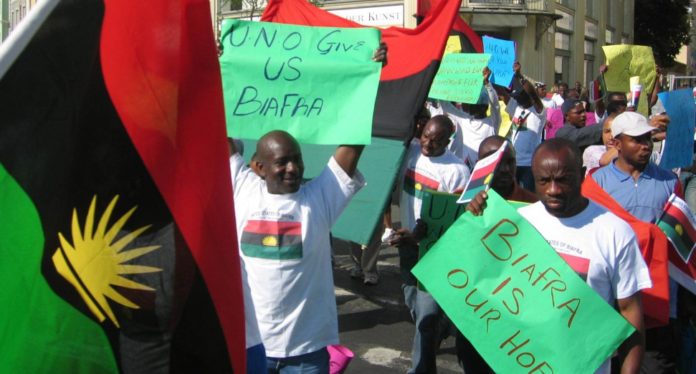 The Movement for the Actualisation of the Sovereign State of Biafra (MASSOB) has condemned the killings of innocent indigenous people of Izombe in Oguta Local Government of Imo State describing it as barbaric and gruesome.

The secessionist group which decried what it termed as ‘genocidal onslaught and mass murder’, stressed that it was a continuation of Nigerian-Biafran war.

MASSOB expressed disappointment with the actions of the Imo State Governor, Hope Uzodimma, claiming that he had sold the state to the Fulani cabals in Aso Rock

The group in a statement issued in Enugu, yesterday, by its National Director of Information, Edeson Samuel, said the governor’s actions would no longer be accepted by it and indeed Ndigbo, saying, “MASSOB describes Hope Uzodimma’s crocodile tears at Izombe as a camouflaged arrangement because he cannot eat his cake and have it again.’

It said it viewed the handicap of Ohanaeze president and the ‘crocodile tears of Hope Uzodimma as hypocritical and deceiving.’

The group went further to note that ‘many soldiers and other security agents have been killed in Zamfara, Borno, Adamawa, Katsina, Kaduna, Niger states etc in northern Nigeria but the soldiers have never lunch reprisal attacks on the citizens of those states. It is only in Igbo land that they always commit mass killings of a community.

‘MASSOB warns Governor Hope Uzodimma that he will never enjoy peace in his reign as the governor of Imo state because the blood of the innocent citizens killed under his watch will continually hunt him.

‘MASSOB reiterated that President Muhamadu Buhari will continue to stumble in darkness because of his pathological hatred against Ndigbo.’