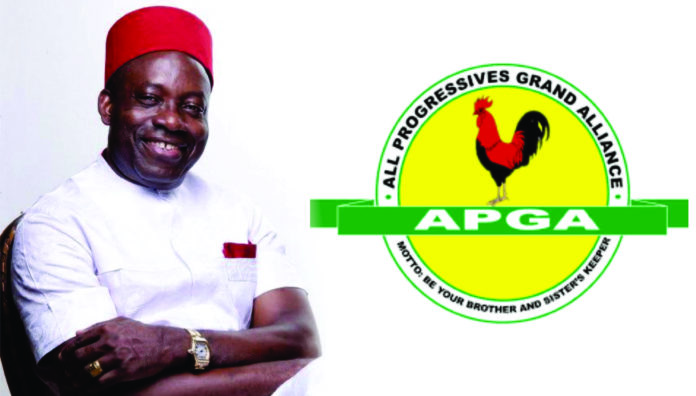 The governorship candidate of the All Progressives Grand Alliance (APGA) in Anambra State, Professor Chukwuma Soludo on Friday said the party will emerge victorious in the November 6 election.

While addressing party supporters and faithful at the APGA 2021Governorship Campaign Council flag off at the Alex Ekwueme Square in Akwa, Soludo posited that the ruling party is leading the state from level to level.

‘The difference is clear; APGA is that of the people. There are the ones who are coming with a conquering army. They want to conquer Anambra,’ the governorship hopeful said.

Soludo, who is also an economist and a former Central Bank of Nigeria (CBN) Governor, scored APGA high for delivering the dividends of democracy to the people of the state.

He also commended former Governor Peter Obi, whom he said created the blueprint that enabled Governor Willie Obiano to consolidate on.

He recalled that in 2010, the poverty level in Anambra was over 50 per cent, noting now that the number is below 20 per cent.

‘Poverty level in Anambra in 2010 was 53 per cent, Nigeria should take note. Anambra State under APGA, the poverty rate has gone down to 14.78 per cent. Which other state has that kind of record?

“That is going to be on the ballot, whether Anambra State will continue that type of progress or a conspiracy by some other to haul the development of Anambra State,’ he stated further.

The APGA candidate also thanked the people of the state for giving him the opportunity to fly the party’s flag in the polls.