HomePoliticsAnambra 2021: We’ll Slug It Out In The Field, APC To APGA
Politics 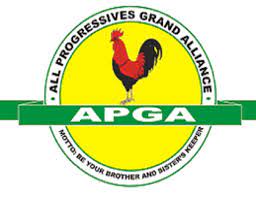 The leadership of All Progressives Party (APC) have boasted that the party is prepared to meet the All Progressives Grand Alliance (APGA) in the field during Nov. 6 governorship election in Anambra.

Chairman of APC in Anambra, Chief Basil Ejidike, made this known in a chat with newsmen on Thursday in Awka.

The Eastern Updates reports that Ejidike was responding to a statement credited to the state Commissioner for Information and Public Enlightenment, Mr. C-Don Adinuba.

Adinuba was reported to have said that ‘Anambra is not Imo where APC can have its way in a political contest.’

The APC chairman said that his party was already fine-tuning arrangements to ensure that it emerged victorious during the governorship election.

‘We are having lots of bigwigs entering APC from other parties and even as we speak, I am in Abuja discussing the modalities for more political heavyweights in the state to join our party.

‘But, you cannot hear such story concerning APGA because bulk of its members are those using the name of Dim Chukwuemeka Ojukwu to defraud people politically,’ he claimed.

Ejidike said that it was ridiculous for Adinuba and APGA to compare Imo with Anambra when, according to him, their party had underdeveloped the state in the last 16 years.

‘When APGA people said Anambra is not Imo, is it in terms of development or what? Can you compare Awka, the capital of Anambra, with Owerri?

‘Owerri is a modern city with a lot of developmental projects which adds to her asthetics, while Awka is a mere ‘glorified village’ with most of the streets not tarred due poor leadership of APGA’, he said.

Ejidike absolved his party of any involvement in the current crisis rocking APGA since after its governorship primaries.