HomeOpinionIgbo People Are Dying - Everybody Is Silent
Opinion 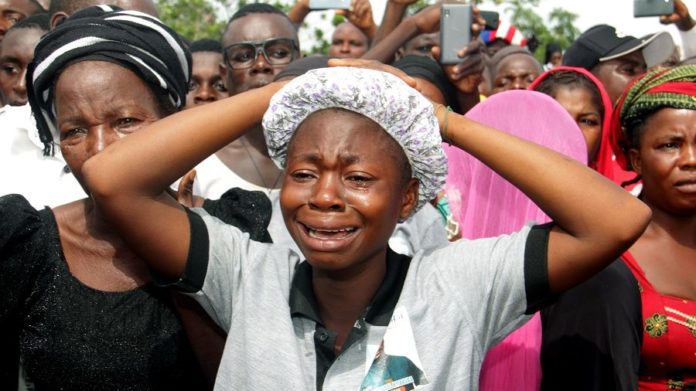 Nnamdi Kanu seemed to be the problem of many individuals in Igbo land. They said they don’t like the way he talks and that he is too arrogant.

Thankfully he is now in detention, he can no longer talk. We are still waiting for all those people who criticised Nnamdi Kanu to begin the talking as Igbo people die like flies everyday.

WHY ARE YOU SILENT?

You said that Nnamdi Kanu is too arrogant and too provocative and that he is a rabble rouser. Why are you now keeping silent? What is preventing you from condemning the killings of our brothers in Ladipo?

You have the space now, you said you had a better strategy, you said Nnamdi Kanu stole your mandate, you said you are the right man. You now have the stage but you are dumb founded. Our people are still dying, come out and do that thing you said is right.

WHERE ARE OUR BISHOPS AND PASTORS?

What is still keeping you from issuing your usual communique? Why are you now silent at the death of your people, the people of God? Are you only after their money and not their welfare?

WHERE ARE THE INTELLECTUALS?

Have you exhausted your intelligence or are you beginning to lack ideas? Are you still debating whether it was a clash between unarmed traders and heavily equipped soldiers? Why can’t you talk again or was your PhD only for criticising Nnamdi Kanu?

WHERE ARE THE POLITICIANS?

You complained that Nnamdi Kanu insults you and that he doesn’t follow your protocols in doing the things he does. But he is now in detention and you can do the protocols the way you liked. So why are you still keeping quiet. These are your people, they voted for you. Why do you betray their trusts?

You said that Nnamdi Kanu’s narrative is leading to the death of IGBOS. The last we checked Nnamdi Kanu was not in Ladipo. He was in Abuja yet some men in uniform still gunned down some people you represent for no reason. We all know that lawsuits in Nigeria is a waste of time, so why are you wasting time in something you are sure the result will fail? Where is the solution now?

Channels television and the corrupt news media in Nigeria described the murder of the Igbo traders as a clash but it was nothing like a clash. It was just on an ordinary day, a fleet of armed Nigerian terrorists in uniform appeared in front of their shop and requested that they unconditionally give them what they did not pay for. The traders refused and they were killed.

This is the level it has reached, they will take away forcefully from you what belongs to you without confrontation. So sad.

Unfortunately no one is going to speak on their behalf because their voice is in detention.

This is for those who criticise Nnamdi Kanu, the fact is that you cannot do what he is doing. When he speaks you criticise and when you are told to speak you protest that no one will hear your voice. You see your life?

The failure of our generation of leaders will still be felt in the next 50 years. Posterity is not going to forget that at a time in our history we had a crop of leaders who were but the worst breed our kind can produce and they would vow never to honor their memories.

Ahead Of 2023: The Reality, Ndigbo Must Come To Terms With