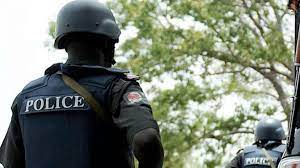 A Police Command in Abia State have adopted unconventional methods of fighting crime by placing a deity-like juju on a checkpoint in Umuahia, the state capital.

The Eastern Updates gathered that unknown gunmen who of late have been burning police formations and killing policemen were reported to be wearing juju brackets ‘Odeshi’ on their waist which allegedly prevents bullets from piercing their bodies.

It was perhaps to neutralize the perceived efficacy of the unknown gunmen ‘odeshi’ that made the police to adopt theirs.

A police source, the juju was placed to protect security operatives from the series of attacks perpetrated by unknown gunmen in the state.

According to the source, ‘The juju was placed to protect security operatives from the series of attacks by the unknown gunmen and also let them know police can equally fortify themselves spiritually’.