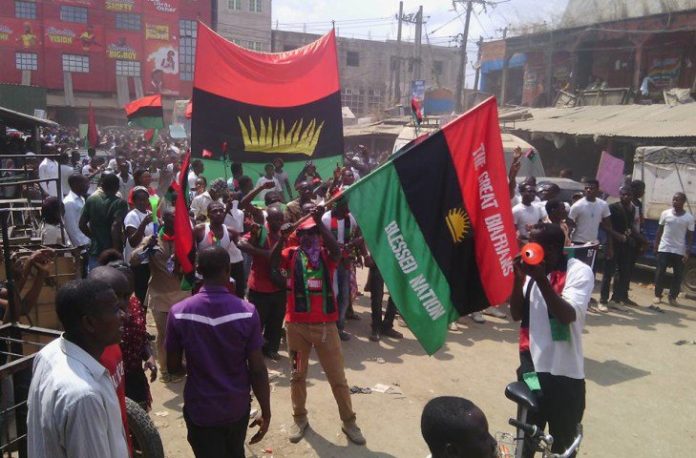 An association identified as the National Igbo Cultural Association of Nigeria, Adamawa chapter, has reiterated its commitment to Nigeria as an indivisible nation.

Chief Fidelis Umeh, the President-General of the chapter, stated this at a news conference on Saturday in Yola.

Umeh slammed the activities of the Proscribed Indigenous People of Biafra (IPOB).

Read Also: Gulak Was Our Brother, North Is Our Home – Igbos In Adamawa

‘Violence will never solve problem of the country. Let us learn to live in peace and eschew bitterness,’ he said.

Umeh condoled with the government and people of Adamawa over the death of Ahmed Gulak, the former aide to ex-President Goodluck Jonathan, who was killed in Imo on May 30.

‘On behalf of the Igbo community, we condole with the government and people of Adamawa, and family of late Gulak.

‘It was shocking, when we heard that Alhaji Ahmed Gulak, the former Speaker of Adamawa State House of Assembly, was killed in Imo state; his death really pained us.

‘We, the Igbo community in Adamawa are not happy with what happened to Gulak.’

Umeh said that his killing in the southeast was not in the interest of the Igbo race, who had been co-existing peacefully with other ethnic groups across the country.

He also said that Igbo people residing in the northern region were not happy with the current development in the South East region.

Umeh, however, said that no one had threatened the lives of Igbo people in the state since the killing of Gulak, adding ‘we are living and conducting our businesses peacefully’.