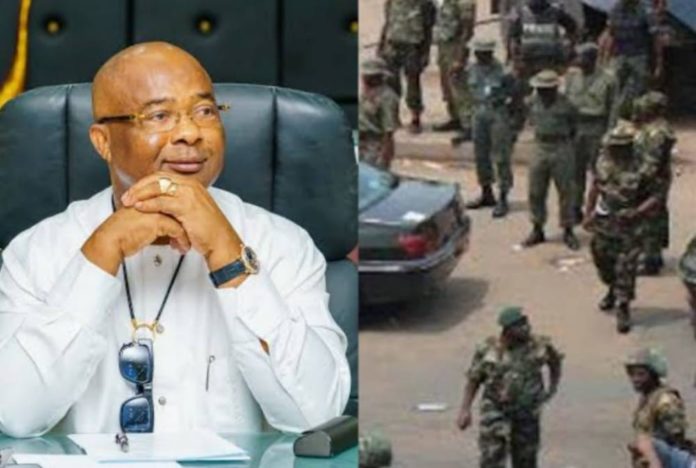 It is no news that Imo State is currently undergoing very tumultuous times after having been besieged by terrible issues of insecurity and terrible leadership on the part of Governor Hope Uzodinma and his clueless administrators who are the grand orchestrators of the killings and disregard for human rights in Imo State today.

Daily, reports are made of stray bullets and unprovoked killings by these military officers who enjoy shedding innocent blood as a way of showing bravado on their end. There are also endless stories of innocent civilians especially youths in the State being beaten up, manhandled and unlawfully detained for little or no offences.

And where is Governor Hope Uzodinma in all of this?

When the stories that the executive Governor of Imo State, Hope Uzodinma now rules the State from the Federal Capital Territory and only sleeps at the Obinze Central Barracks whenever he is in the State for some official assignment started making rounds, many waved it off as petty rumours and ‘beer parlour talk’ but recent investigations and reports have proven it all to be true. An analysis of Governor Hope Uzodinma’s recent motorcade would show that his security detail has been tripled with more bulletproof vehicles and state-of-the-art defence systems for his protection.

The coward of a Governor only knows how to selfishly defend himself and his worthless administration while his state burns from actions and inactions which he orchestrated himself.

The recent shoot-on-sight order by President Muhammadu Buhari cannot be the solution to the insecurity that has besieged Imo State. Besides, importing soldiers and police personnel from the Northern part of the country to the Southeast with the charge to shoot-on-sight is more of a military culture. The essence of a democratic rule is the total involvement of the people in the governance of their affairs and not government by force or kill-on-sight. This is what Governor Hope Uzodinma has to learn.

Before the current madness of attacking police and correctional facilities by the so-called unknown gunmen in Imo State, the people of the State had known peace all the while. The state and its people were regarded as one of the most peaceful states, where visitors and people from other warring zones found peace and enjoyment with a lot of merriment.

The whole craze about shooting and the rest of illegal activities being perpetrated in the State by the unknown gunmen started recently as a result of the deployment of soldiers in the Orlu area of the State. What started in a particular spot as a result of an alleged shootout between the police and members of the Eastern Security Network (ESN) has indeed created a big tension and worry in the country.

The acceptance by the cowardly Governor Hope Uzodimma in faraway Presidential Villa, Aso Rock after a meeting with President Buhari to have invited the soldiers to Orlu, his political zone and where he hails from, was what sparked off the insecurity challenges in the state today.

But, as often canvassed, the simple solution to the problem at hand could have been dialogue and not force. Dialogue is the only conflict resolution that soothes the mind of an agitator or aggrieved person(s). It is unfortunate that Nigerian leaders like Governor Hope Uzodinma lack it, maybe, because he feels like the authority resides with him and therefore, every discussion must start and end with him. They also don’t think that peace could be achieved at a roundtable.

Credible information has it that the Nigerian Military has drafted reinforcement troops from some of its formations fighting insurgency in Borno State to join the troops in the Southeast region over the Military’s clash with the Indigenous People of Biafra (IPOB) and its security arm, the Eastern Security Network (ESN). Military sources alleged that the reinforcements were drawn from some battalions including the 231 Tank Battalion in Biu, Borno State, which is under the 3 Armoured Division, Jos, Plateau State. As of January 2021, the Commanding Officer of the 231 Battalion, Biu, was a southerner, Lt. Col. M. E. Obi, who is ordinarily versed in the workings of the Southeast. But, it is not sure whether he will be in the Southeast alongside the reinforcements.

In the last two weeks, these soldiers have killed not less than sixty innocent people, mainly youths, who were going about their normal business to fend for themselves. Recently, the Army gunned down two innocent passersbys in front of Imo State Government House, Owerri. The deceased persons met their untimely death while attempting to cross the road in front of the Government House, when the soldiers opened fire on them without flagging them down to identify themselves. It was learnt that one of the deceased, identified as a 24-year-old Miss Divine Nwaneri and a first year student of Imo State University was in company of three other friends in a custom-colour Lexus 250-IS car was shot as they drove past the Government House roundabout at about 10pm on Sunday.

Another victim, a farmer, delivering some pigs in a bus was also shot dead Tuesday morning in front of the Government House roundabout. The lifeless body of the farmer was left in his driver seat until about 12noon when it was evacuated.

As if that was not enough, the same soldiers allegedly shot sporadically across the major streets of Owerri Municipality, specifically around Hausa Quarters (Ama Hausa), Douglas road, Mbaise road, Wetheral road, etc. all through the night of Monday as inhabitants scampered to safety.

One young man also identified as a student of Imo State University and a final year student was reportedly killed by a stray bullet along Ama Hausa area. A businessman, Noel Chigbu was equally not lucky. Noel, the operator of Sharwarma Zone in Akwakuma area of Owerri, was killed by military men at the Amakohia flyover in Owerri at about 10pm for allegedly ‘violating checkpoint rules.’ It was gathered that the soldiers, who snuffed life out of him at the Checkpoint had dumped his remains at the Federal Medical Centre, morgue, Owerri, took his badly shattered car to the police station and made an entry that his relatives should visit the health facility and claim his body. Noel was said to have acquired a new Camry car and had gone to drop off his friend that fateful night. But, he never returned. He left a four-month pregnant wife, a two-year-old son and four year old daughter.

Already, the Imo people are worried over the maltreatment, harassment and unnecessary punishment soldiers have been subjecting the people in the state capital. Several commuters and pedestrians are also feeling the heat as they are being asked to raise their hands up, frog-jump and other inhuman treatments.

It is very sad that the Governor Of Imo State is a coward who buries his head like an ostrichtch and it is worse that he is aware of these unjustified wicked acts on his wards and as a stooge of the Fulani cabal, he has chosen to keep quiet and look the other way.