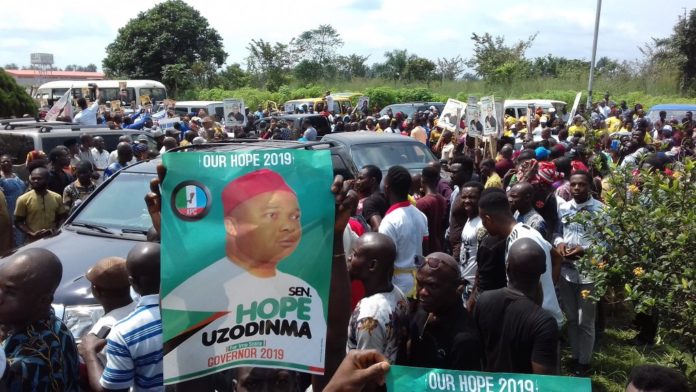 Apart from the issue of security challenges faced by the Imo State Government, findings by The Eastern Updates can reveal that the State governor, Senator Hope Uzodinma is witnessing some very sad and turbulent moments arising from friction in his political camp and his CampHope family to be specific.

CampHope which is the pseudonym used to describe Governor Hope Uzodinma’s political family in Imo State and beyond was said to have come into existence during the PDP Sherrif/Markafi crisis, when the former Orlu zone senator left the umbrella party for his newfound love, APC.

On assumption of office as Governor in January 2020, the majority of his appointees were picked and anointed from his Camp Hope faithful and those who are sympathetic to the group’s cause. Any sycophant who sang praises of Governor Hope Uzoidinma and his APC-faction was regarded as a member and thus ‘blessed’ or bribed in accordance of their standings in the general society. However, findings by The Eastern Updates have revealed that the centre can no longer hold as there are serious internal wrangling among them in most of the Local Government Areas.

The Eastern Updates’ investigation revealed that the unity of purpose among his followers that heralded Uzodinma into office has waned greatly giving room for internal bickerings and blackmails to excel. It was learnt that a majority of the political leaders who are under Uzodinma’s influence are at each other’s throats over who should be the apex leader in their various wards, LGA, federal constituencies and zones and the quest for this leadership has thrown the CampHope followers into unprecedented tussles for leadership and control of the structure. For instance, Owerri zone leaders supporting Uzodinma are sharply divided. The root causes are traced to a bitter supremacy battle which boils down to an unbridled desire to be at the top. The Eastern Updates was informed that despite efforts made by the governor himself to settle the warring leaders, mutual suspicion and lack of trust is ravaging the political camp. Most of the Owerri zone leaders claiming to be behind Uzodinma have different camps and allies opposed to each other. The division was said to have alarmed the governor to intervene but it was further gathered that the schisms had already torn apart the rank and file of his followers in the Owerri zone.

In the Okigwe zone, The Eastern Updates can also state that the two point-men manning Uzodinma’s political front in Imo East Senatorial District; Speaker Paul Emeziem of Onuimo and the secretary to the state Government, Cosmos Iwu are reported not to be flowing together anymore due to unavoidable differences in their camps. Competent sources revealed that both have raised parallel arrangements to control the zone which has pitched the two against each other. It was also gathered that the major cause of the rift is who should undertake the role of Apex leadership of the Okigwe zone in the Uzodinma administration. While the Speaker feels that his number three position would earn him the position, Iwu thinks otherwise since he wines and dines directly with the executive.

Another factor that is leading to the complete breakdown of the CampHope political family is the constitution of the State, LGA and Ward caretaker chairmen of the APC. The Eastern Updates gathered from the party members that there is a terrible brewing crisis in all the LGAs as the key stakeholders, believed to be supporting Uzodinma can no longer work together to produce a consensus candidate for the position. From Oguta to Ihitte Uboma and Ideato North to Owerri West LGAs, agents of Uzodinma are at war. Details of the bickering have it that in most cases, political appointees and leaders serving the governor have parallel nominations indicating a complete break up.

The straw that broke the camel’s back, according to reports available to The Eastern Updates was the dissolution of the State Exco where 20 Commissioners were sacked a week ago.

Sources have it that unlike the early stages of the Uzodinma administration where love and unity reigned, the appointees later resorted to in house blackmail, backbiting, gossiping and working against each other. The dissolution is traced to these anomalies which the governor noticed before sending them packing. And further reports have it that despite coming in the public to appreciate the governor for considering them commissioners from the onset of the 3R government, the sacked appointees expressed reservations about how they were treated before their surprising removal. Some even spoke out about the open show of nepotism in the house and how few were always favoured in the course of their duties.

Coupled with the above factors, the Camp of the governor is witnessing turbulent times at the moment and this should not be so surprising given the fact that the Governor himself is an incompetent as his alleged cabinet members and supporters who have failed to bring up a solid agenda that would make Imo State better for Imolites.