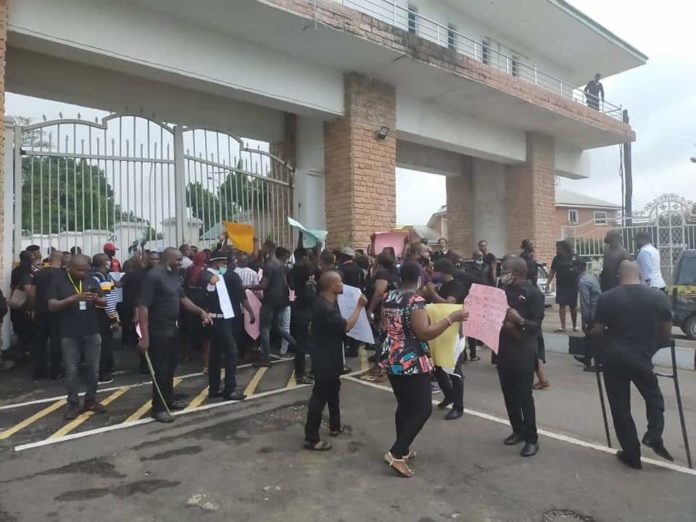 The staff of the Imo State Oil Producing Areas Development Commission (ISOPADEC), on Tuesday, staged a protest over 80 percent slash in their salaries.

The workers, who carried placards with various inscriptions, demanded an immediate end to what they called an ‘outrageous’ cut in their monthly salaries.

They pledged that no amount of intimidation and clampdown would stop them from demanding complete payment of their salaries.

The chairman of the oil workers in the state, Chinedu Awuzie, and that of the workers’ welfare committee, Ifeanyi Adakwa, expressed bitterness that they were being harassed and intimidated for demanding their rights.

Awuzie said that the slash in their salaries started in January 2020.

He said: ‘In their first protest, the government arrested 15 of us, including pregnant women, and detained them for 35 days in prison custody before the court granted them bail.

‘In the second protest, the government sacked 108 of us in a swoop, alleging employment irregularities.

‘But this development will not deter us. We continue to ask for our rights. The first protest was on April 7 2020 and the second one on April 9, 2021.’

It was gathered that even the board members in ISOPADEC and their aides had not received their allowances and salaries since January 2021.

When contacted, the spokesperson for the Commission, Promise Ekeh, confirmed that ISOPADEC workers’ salaries witnessed slash, but that the Managing Director, Chief Charles Orie, with the help of the board, was engaging the government to find a lasting solution to the problem.