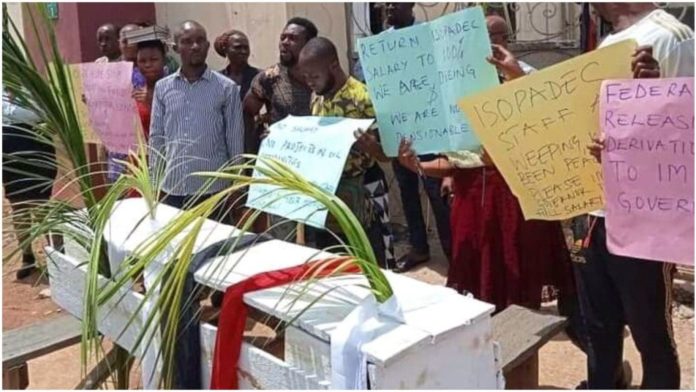 Workers of Imo State Oil Producing Areas Development Commission (ISOPADEC) on Tuesday, took to the streets of Owerri, the Imo State capital, demanding for the return of their salary scale.

The Eastern Updates gathered that the protesting staff also demanded that their monthly salary be paid as at when due.

The leader of the delegation and chairman of the ISOPADEC workers, Chinedu Awuzie, while speaking to the press, said the ill treatment meted on them by the government was undeserved.

According to him, ‘the government has frustrated us enough. During our last protest in 2020, 15 of us including a pregnant woman were arrested and detained for 35days when the court granted us bail.’

‘The government had in same 2020, sacked over 108 of our staff, and alleged they were employed illegally by individuals.’

‘As if that was not enough, the current government under Senator Hope Uzodinma went ahead to slash our salaries.’

‘All we ask for is for the government to approve our full scale salary as what it used to be. We should be entitled to our rights and privileges since they said we are not pensionable.’

‘We have been agitating against this but it seems the government is turning deaf ears. Let them do the needful and return our salaries to normal or we will embark on a mother protest,’ he said.

When contacted, the spokesperson for the commission, Promise Ekeh confirmed that there was a slash in their salary, disclosing that the Managing Director of the commission, Charles Orie, with the help of the board, had engaged the government to find a lasting solution to the issue.

There were several inscriptions on their placards which included, ‘we want a return of our complete salary’, ‘the government is suffocating us to death’, ‘we don’t deserve this ill treatment from the government’, and so on.