HomeEditorialMasquerades In Igbo Land And Their Significance
Editorial 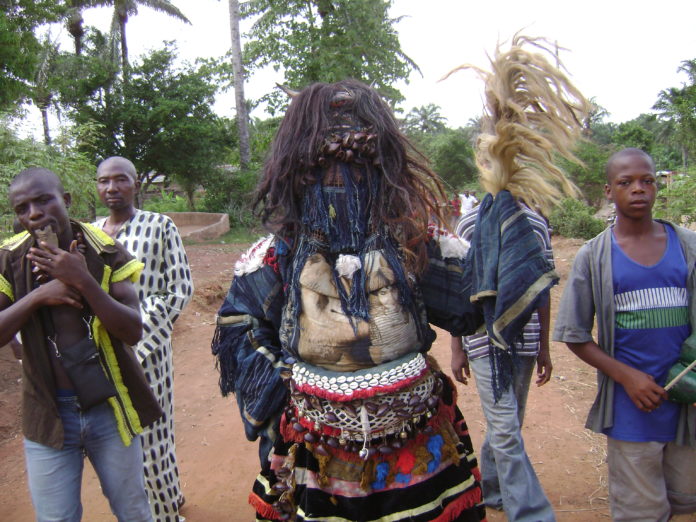 In the past, masquerades were not just used for entertainment; they served political roles too. They stood as custodians of village and clan laws. Anybody who broke the law risk being visited by a masquerade. That time, too, the story of Igbo masquerades being spirits was still much believed. Folks believed masquerades were not human and weren’t born by women – it is believed that they appeared from ant holes at midnight.

The masquerade community was a revered cult at that time and every information surrounding their existence, place of rest and even as little as costumes were not common knowledge.

This initiation process and the way the entire masquerade fellowship is viewed by people have changed today.

Masquerading may require a one-person team or a team of more people which may include vocalists who hail the masquerades, drummers and players who play the instruments, advisers and then, the masquerade itself. Most of these masquerades have a mask on their face and are covered from head to toe with some piece of clothing or/and bamboo rafters.

Depending on the type of masquerade and where it comes from, it may differ. Some of the masks are meant to be beautiful because the masquerade connotes beauty among others. On the other hand, the others are sinister and are feared whenever they make an appearance. In Igbo land, masquerades appear during traditional celebrations, funerals and festivals, particularly the New Yam Festival.

Every masquerade holds distinct attributes that distinguish them and builds a storyline or a personality. They may be a war masquerade, or a pretty one, or an old one. They may also be specialized in skills such as dancing, acrobatics, talking and a host of others.

Here are some festive masquerades you’ll find in Igbo land 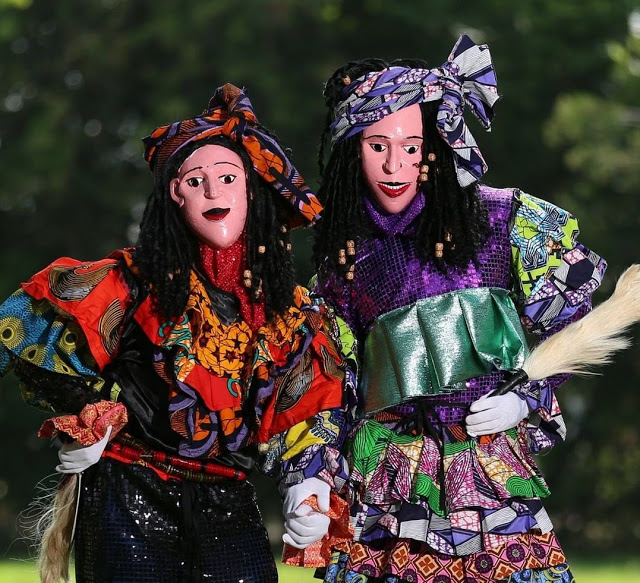 Adamma is a contemporary maiden spirit mask worn by men and particular to some villages in the South-Eastern part of Nigeria. The ceremonial masquerade is named after Adamma, a name loosely translated to ‘beautiful woman’ and reserved for the first daughter of a family. She is always gorgeously dressed in colourful attires and dances so beautifully that most times, people wonder whether it’s actually a man under the mask. 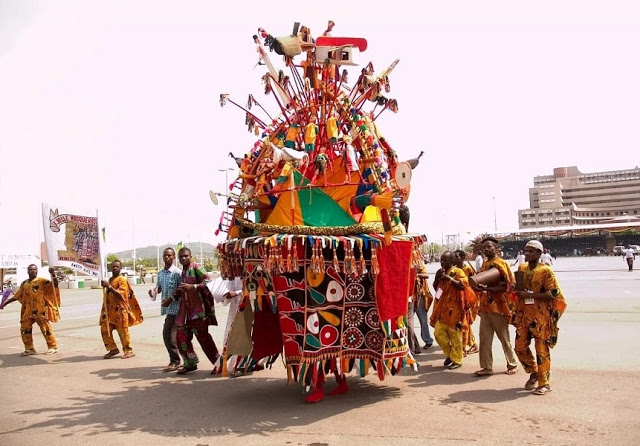 The Ijele masquerade originated from the Old Anambra state, and it is the largest mask system ever to enter the history of the world masking tradition. Ijele is the King of all Masquerades and in the olden days, used to have forty-five different masquerades perform on top of it. Currently, these forty-five masquerades are represented by the figurines seen on top of Ijele. It is the climax of all masquerades and performs alone and mostly last. In many communities in Southeast Nigeria, the Ijele is brought to evoke fertility and a bountiful harvest feature. It also makes an appearance during celebrations, burial ceremonies and other special occasions. In any occasion the Ijele is going to display, expect it to come out last. Before the Ijele comes out, the entire ground would clear. Every other small masquerade displaying must step aside for the king of all masquerades to take the ground. For the Ijele must not share ground with others.  Sometimes the Ijele can be so large it would have people standing on it while it is performing.

This masquerade is a very stern one and also fully masculine-featured. They’re typically brisk, aggressive, agile and notorious in their own way. They’re also mainly worn by youths because they’re active masquerades so much so that about two or more strong men are ever around it with a rope that is tied around its waist to draw it back from overacting. 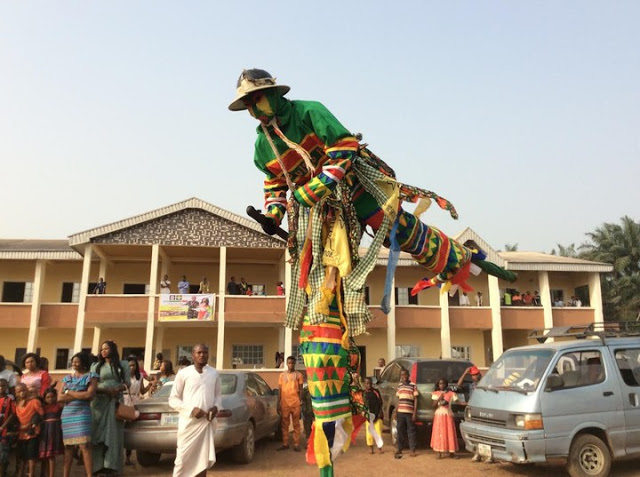 The Izaga masquerade is probably the tallest Igbo masquerade and can be seen as a comic masquerade or an entertainment one. They can grow shorter, and grow taller as well. They make an appearance during traditional ceremonies or festivals for the sole aim of satisfying the observers. 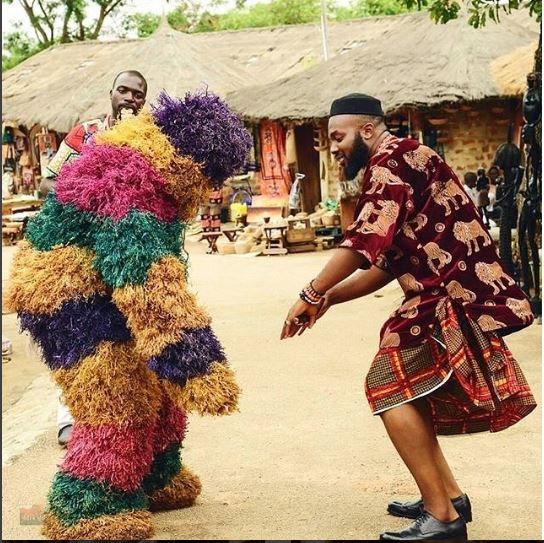 The Odo is a masquerade peculiar to the Agbaja (Ngwo and environs) people of Enugu state. Typically, the Odo masquerade represents a deity who provides the living with a chance to commune with their dead in line with belief and customs. During the Odo festival, The dead are said to work freely among the living through the manifestation of this masquerade.

There are hosts of other masquerades in Igbo land that serve various purposes and various functions. Just as they’re expected to be revered, they are also not allowed to abuse their powers. 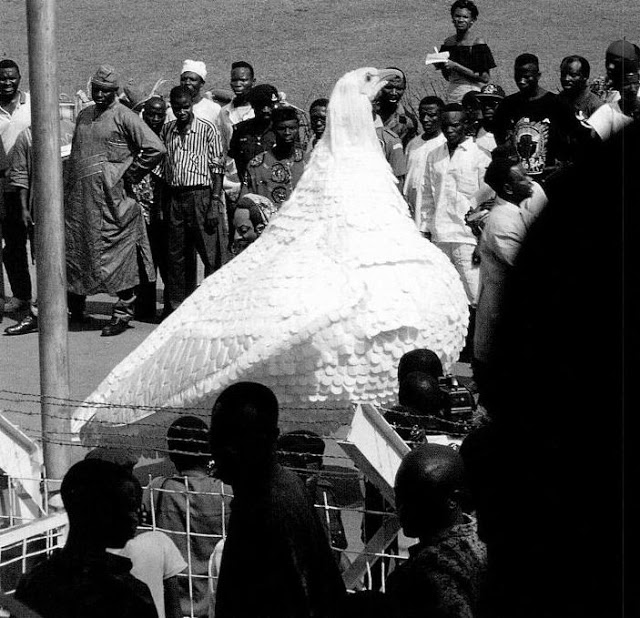 Mmanwu Ugo is an elegant masquerade. It is one of the most expensive masquerades to showcase in Igbo land. The Ugo masquerade like any other animal-spirit masquerade (Atu, Mmanwu Odum, Agu Iyi, etc.) embodies both the mannerisms and significance of the ugo bird (African eagle). Eagles are highly respected birds in Igbo land. You will likely only see the Ugo masquerade displaying on big occasions like ofalas. It is a wonder to behold, from its subtle and graceful dance steps to the moment it drops to the floor to lay an egg.

It can safely be said that westernisation has sort of watered down the relevance of masquerades in rural communities, which is actually a good thing because the masquerade cults are prone to easy corruption and can be used for devious purposes. Nevertheless, these masquerades are still a cynosure of all eyes during festive periods in Igboland and other important functions.