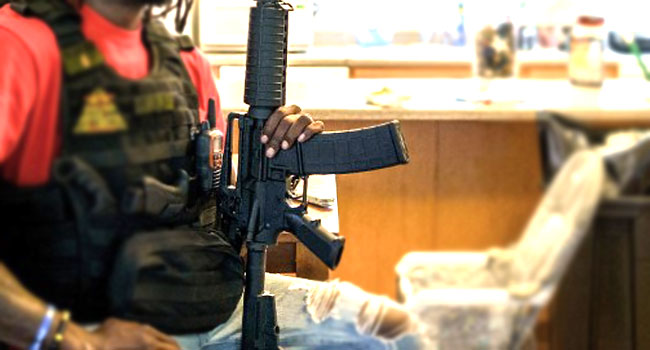 There was palpable tension in the early hours of Thursday in Aba, the commercial nerve center of Abia State as unknown gunmen stormed the city, shooting sporadically as residents scampered for safety.

According to a police source, the shooting began around the College of Health Technology where piercings of bullet shots were seen on the wall of the school.

The gunmen were said to have moved with their vehicles towards the Ogbor Hill area of the city.

Read Also: School Shut In Abia After Explosives Was Sighted In Classroom

Earlier, a team of SWAT police officers who had gone to effect arrest were attacked around the Ariaria area of the city.

Unknown hoodlums were said to have resisted the arrest of a suspect whose identity is still unclear.

News correspondents gathered that one of the SWAT officers was shot and injured in the process.

The Area Commander in charge of the area was said to have called for reinforcement with about 50 policemen.

The hoodlums were eventually overpowered and the arrest effected.