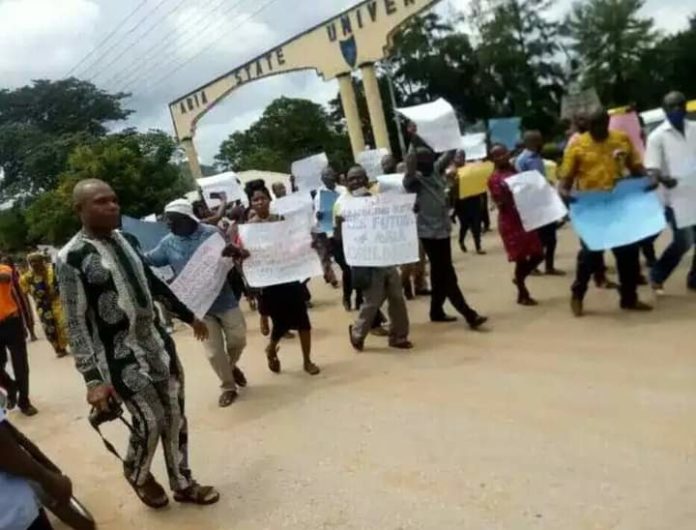 The Non-Academic Staff Union on Education (NASU), the Imo State chapter, has tasked the federal government to approve a special salary scale for them, lamenting that their salaries are not enough to pay their bills.

The staff embarked on a protest in Owerri on Thursday to press home their demands.

They also asked that the federal government order the approval for the extension of the retirement age for teachers from 35 to 40 years, insisting that the 35 years retirement age is not enough.

The group also urged the FG to expand their retirement span from 60 to 65 years.

Speaking to journalists during the protest, the Assistant Secretary of NASU in the state, Margaret Ezekiel, requested the federal government to include the non-teaching staff in the implementation of special salaries packages.

She said ‘our demand is simple and just. We ask that the Federal Government do the needful by offering a better salary package for us because we deserve it.’

‘The government should look at us with a human face and appreciate the vital role we play in institutions of learning. We are not daring the government but we asking appealing to her to do the needful.’

‘We, therefore, request the government to include the non-teaching staff in the implementation stage of these packages, because most of the non-teaching staff are professionals and possess equivalent certificates and experience like their teachers’ counterpart and equally play vital roles in graduating the pupils and students.’