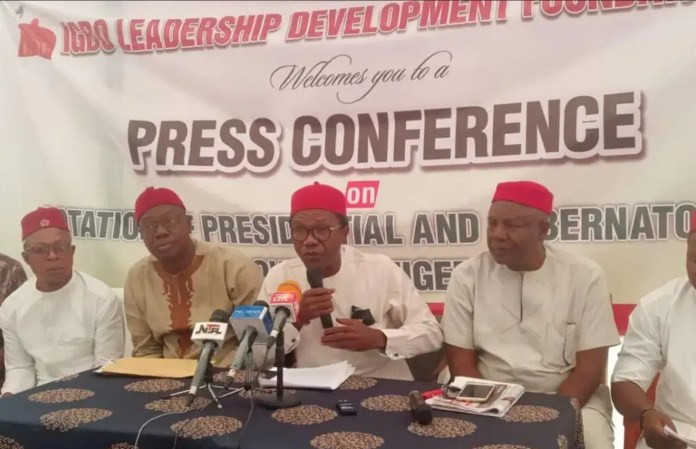 An Igbo group named the Igbo Leadership Development Foundation (ILDF) has tasked the Peoples Democratic Party (PDP) to stick to its policy of rotating presidential tickets between the north and south.

The group made this appeal at a press briefing in Abuja, yesterday, which was jointly addressed by its  Chairman, National Secretary, and Director of Public Affairs, Godwin Udibe, Onyebuchi Obeta, and Law Mefor, respectively, said it was the turn of the southeast to produce a presidential candidate for the PDP in 2023.

The group equally called on the All Progressives Congress(APC) to zone its presidential ticket to the South East, saying there would be consequences for any political party that ignores the call for a southeast president in 2023.

It rejected the report of the party’s 2019 Election Review Committee headed by Bauchi Governor, Bala Mohammed, which recommended that the presidential ticket for 2023 be thrown open to aspirants from all parts of the country.

‘We believe that this panel’s report contradicted itself and threw both caution and the constitution of the PDP into the gutter by recommending that the presidential ticket be open to all Nigerians; an all-comers affair.

‘For the avoidance of doubt, permit us to quote the PDP constitutional provision on zoning. The rotation and zoning principle was engrained into the PDP party’s Constitution in 2009. Article 7 (2) (c) of the PDP Constitution states: ‘In pursuance of the principle of equity, justice, and fairness, the party shall adhere to the policy of rotation and zoning of the party and public elective offices, and it shall be enforced by the appropriate executive committee at all levels.’ So in line with this express provision of the PDP constitution, since power has resided in the north for two straight terms, it has to move south, specifically to the South East in the spirit of rotation and zoning, which has been the practice since 1999.

‘All political parties ought to flow with this national understanding. PDP, APC, and other major parties cannot be moving north when power is supposed to be moving south if they hold the unity and continued corporate existence of this country dear to heart.’ They concluded.