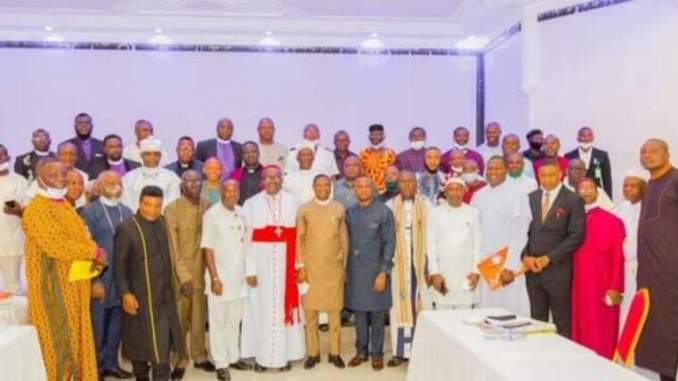 Church leaders in the southeast have suggested that the quest for Igbo presidency in 2023 should be followed up through consensus building and mutual understanding with other geo-political zones for its actualization.

This was contained in a communique at the end of the South East Peace Meeting convened by Executive Secretary, Nigeria Christian Pilgrims Commission (NCPC), Rev. Yakubu Pam, held in Enugu State.

It suggested that security and conflict resolution should be taught from primary to tertiary institutions to enable Nigerians to imbibe the essence of peace.

‘The quest for Igbo Presidency should be amplified through extensive consensus-building with other tribes for it to be actualized in 2023. There is a need for the reform of the electoral process to enhance credibility and acceptability. It was equally agreed by church leaders that the perennial security challenges facing the country have created a gulf between the governed and the government which has led to despondency.’

The meeting also resolved that security should be beefed up in every part of the country, particularly the nation’s borders to curtail the migration of criminal elements into the country.

The religious leaders admonished Nigerians to learn how to build bridges of friendship and tolerance to live in peace with one another.

‘In spite of the numerous challenges that have bedeviled Nigeria, insecurity has posed the biggest problem to the citizenry mainly  arising from herdsman farmers conflicts  making Nigerians live in perpetual  fear, distrust, and apathy  towards the affairs of government.’

The religious leaders advised the government to abolish open grazing without further delay as a way forward in resolving the issues.

They urged the Federal Government to ensure that appointments into key positions in security agencies are based on merit and equitable criteria, not on ethnic and religious considerations.

They said the people of the southeast should be given fair consideration in the appointment of persons at the federal level.