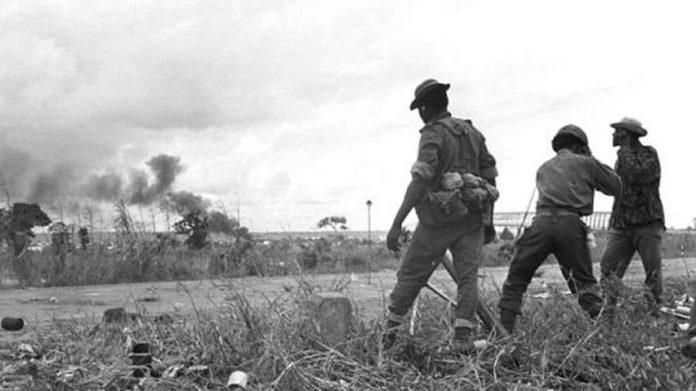 ‘I looked around and I saw machine guns all around us. Some of them were also carrying automatic rifles. One of them shouted an order, and they started shooting.’ With these chilling words, a survivor of the deadly massacre describes how the massacre of hundreds of innocent civilians began in Asaba more than 40 years ago.

This editorial has been targetted to document how this terrible event unfolded, why it is important, and why the people of Asaba now demand recognition and compensations for the sad events of that day.

It started on October 4, 1967, when Nigerian federal troops entered Asaba, the Niger River town that was then part of Nigeria’s Midwest Region. The war over the secession of the predominantly-Igbo Eastern Region, renamed Biafra, had broken out in July; in August, the Biafran army had advanced across the Niger Bridge and progressed through the Midwest, headed for Lagos. Federal troops counter-attacked, pushing the Biafrans back across the Niger at Asaba.

The Biafran militia blew up the Onitsha end of the bridge, leaving the Federal Second Division, commanded by Colonel Murtala Muhammed, on the Asaba side. Asaba, although ethnically related to the Eastern Igbo, remained part of Nigeria, and supported the government’s ideal of a multi-ethnic ‘One Nigeria.’ As Wole Soyinka wrote in 1972, the Midwestern Igbo, caught between their desire to remain part of the federation and their identity with Eastern cousins, became ‘the most vulnerable Nigerians’.

Asaba had a long tradition of high education, producing a disproportionate number of professionals and high-ranking civil servants, who had contributed to a sense of allegiance to a united Nigeria and they trusted that Federal troops would behave appropriately.

Head of State, Gen. Yakubu Gowon, had issued a military Code of Conduct, so when troops arrived, the townsfolk were unprepared for what followed. Soldiers occupied the town and began killing civilians (mainly boys and young men) accused of Biafran collaboration. Dozens, perhaps hundreds, were killed in the next three days, some apparently randomly, while others appeared to be targeted.

Read Also: Why Fulani Cattle Rearing Must Be Stopped In Biafraland

Stanley Okafor, then a university student, described how he and several relatives were summoned by troops: ‘we got to the police station and there was a huge crowd. And then they would come around and they would say do you know Mr. X, Mr. B, and do you know his house? They had names they wanted to kill. And once in a while they’d pick someone from the crowd, go to the back and you hear gunshots. And the crowd would wail.’ Patience

Chukwura, a young mother expecting her fourth child, saw her husband Eddie gunned down near the police station, along with his brother, Christian:

‘That made me hysterical. I held onto the soldier and said, ‘Why did you kill my husband?’ The man, with the butt of the gun, hit me on the chest and said, ‘woman, if you’re not careful, you’ll get killed as well.’

‘We feared they were going to wipe out everybody in Asaba, especially male children.” Troops invaded homes, demanding money, executing men and boys, and abducting women, often before setting the houses ablaze. The streets were littered with corpses.’

Patrick Okonkwo recalled that his compound was crowded with extended family members, when soldiers entered and shot his two brothers, a cousin, and two other relatives. His father buried them in shallow graves in the compound.

On October 7, in hopes of avoiding more violence, Asaba leaders summoned everyone to gather to show support to the troops by making a pledge to One Nigeria. Hundreds of men, women, and children assembled, dancing and singing. According to the survivors, as the parade reached a major junction, troops removed women and young children and directed men and boys into an open area. As the crowd began to realise what might be happening, panic grew.

Another survivor narrated: ‘Women who came with their sons were removing their skirts and blouses to disguise them. And I looked at the whole place, there is nowhere to escape.’

Ify Uraih was 13 years old, and had joined the parade with his brothers and father. He described how the officer in charge, identified by several witnesses as Ibrahim Taiwo, gave the order to open fire, and the massacre began: ‘Some people broke loose and tried to run away. They shot my brother in the back. The rest of us just fell down on top of each other. And they continued shooting, and shooting, and shooting. I don’t know how long it took; after some time there was silence.’

Hundreds died; survivors report climbing from among heaps of bodies when the soldiers finally left hours later. Ify Uraih survived, but his father, Robert, and brothers Emma and Paul were dead. His brother Medua was shot multiple times, but survived. Between 500 and 800 were murdered, in addition to many from previous days, and many people fled the town.

Although there is no firm death count, extensive research has suggested that more than 1,000 died at the hands of the troops during October.  Most were buried in mass graves, without observing requisite practices, and the town was destroyed, with most of the houses looted and burned. The long-term impacts of these tragic events were profound; many extended families lost multiple breadwinners, and the town’s leadership was decimated.

Survivor accounts and reports by relief agencies show that Asaba remained in dire straits until the war’s end, most inhabitants having fled or subsisting in refugee camps. Soldiers assaulted and abducted women and girls with impunity, many women and girls were raped or forcibly ‘married’. The destruction was so complete that Asaba disappeared from the official roll of Nigerian towns in 1969.

The atrocities at Asaba remained virtually absent from the published record, and have largely remained unacknowledged. A major reason was the lack of media coverage at the time. Of course, Biafra became world-famous, but its public, international narrative developed after the retreat of the Biafrans across the Niger, after which the federal government imposed a blockade, effectively starving the East into submission, and searing the images of emaciated children into the international memory of the War.

This contrasts with the lack of attention in 1967, when the Midwest people suffered most. The Federal government suppressed accounts of military action against civilians in the Midwest, and the international media were carefully managed. The 1967 massacres received almost no press coverage at the time. In later historical accounts, the Asaba events, if mentioned at all, are usually dismissed as aberrant or unproven.

In 2001, some Asaba survivors testified to the Nigerian Human Rights Violations Investigation Commission (HRVIC, or Oputa Panel), commissioned by President Olusegun Obasanjo, and charged to consider the history of human rights abuses from 1966 to May 1999, of which civil war events were part. The Asaba accounts were included in the Ohaneze Petition, presented by Barrister Chuck Nduka-Eze, and drawing on earlier research by Emma Okocha, as well as testimonies recorded in 1969.

The HRVIC’s report was never officially released, although it is now available on the internet. Obasanjo declined to offer formal apologies, although in a landmark moment, Gowon publicly apologised to the people of Asaba in 2002, opening the door to further efforts at truth and reconciliation.

Most are direct witnesses and survivors, while others testified about the long-term impacts on Asaba. They were interviewed in several locations – Asaba, Lagos, Ibadan, Benin City, and the United States, and their stories produce a compelling, detailed, and consistent account of the atrocities that befell their town. Other research have also produced several interrelated conclusions. First, it shows that the killings in Asaba were unprovoked, and stemmed directly from a chain of events that started before the war, continuing through the Biafran offensive across the Niger, which stirred up simmering ethnic hatred that had previously resulted in violence toward Igbos. This fueled the undisciplined actions of the counter-attacking federal troops against Nigerian civilians.

Second, although the Federal authorities worked hard to suppress the news, people fleeing Asaba spread the word, and the killings of large numbers of people of Igbo ethnicity bolstered Biafran claims that the war was one of genocide. This helped steel the Biafrans’ resolve to continue the eventually hopeless war, and so represents a pivotal moment that directly contributed to the progress of the conflict.

More broadly, the Asaba killings raise issues that go beyond the tragedy of one community. The war has left a bitter legacy; many today argue that the violence and ethnic hatred endemic in contemporary Nigeria are partly attributable to an unwillingness to come to terms with it. This is why Nigeria suffers from a lot of insurgency, banditry and other acts of terrorism on a daily basis without any form of respite.