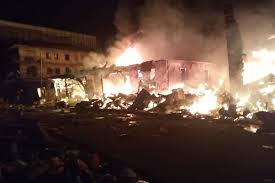 It was all tears and sorrow yesterday as an early morning fire destroyed goods and property worth millions of naira at Amobi plastic market, Onitsha in Anambra.

An eyewitness, who pleaded anonymity, told newsmen that the raging fire was noticed at about 2:00 a.m. at a plaza section of the market.

According to the source, residents and later, police officers, assisted to quell the fire using buckets of water until firefighters from the state Fire Service arrived about 30 minutes later.

Some of the items destroyed by the fire ranged from plastic buckets, drums, baskets, chairs and tables, among others.

Confirming the incident, the Police Public Relations Officer (PPRO) in Kwara, CSP Haruna Mohammed, said there was no reported case of loss of life or injury sustained during the incident.

‘Fire Service was equally contacted and they responded promptly, and the fire was extinguished with the help of firefighters and other sympathizers in the area,’ he said.

Mohammed said the investigation was ongoing to ascertain the extent of damage and circumstances surrounding the incident. He advised the public to always apply safety precautions by switching-off all electrical appliances in their homes, shops, and workplaces when not in use to avert such ugly incidents.