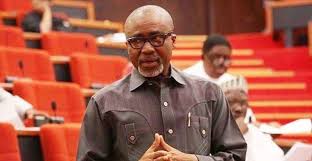 The Minority Leader of the Senate, Senator Enyinnaya Abaribe has been warned against heating up the polity in Abia State by insulting the former governor Orji Uzor Kalu.

This warning came from a pro-unity group known as Aba Frontiers Forum (AFF).

Reacting to news reports in some national dailies and online platforms with the caption, ‘I survived three impeachments as Kalu’s deputy,’ an extract from Abaribe’s book, Made in Aba, the group faulted the minority leader for making unsubstantiated claims and unguided utterances, adding that Abaribe emerged deputy governor out of Kalu’s patriotism and magnanimity.

Read Also: What My Refusal To Bow To Kalu’s Mum Caused Me – Abaribe

Nkem Chike, the group’s coordinator, stressed that Kalu as a mortal was not perfect, neither was Abaribe perfect during Kalu/Abaribe’s administration in Abia State.

While admonishing the minority leader to show appreciation to the Kalu dynasty for giving him the opportunity to serve as deputy governor, the group stressed that derogatory utterances and unguided statements credited to Abaribe are uncalled for and capable of jeopardizing the relative peace in the political space in Abia State.

He said: ‘The statements credited to the Minority Leader of the Senate, Senator Enyinnaya Abaribe as reported in The Punch newspaper, being an extract of Made in Aba, a book authored by Abaribe are unpatriotic, uncivilized and uncalled for.’

While urging Abaribe to be grateful to Kalu who gave him the opportunity to serve as deputy governor, Chike emphasized the need for Abians to close ranks for the benefit of the people.