HomePoliticsI Won't Negotiate With Bandits If I Were President - Kalu
Politics 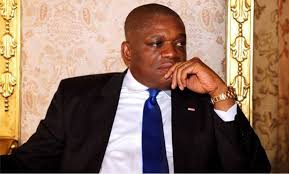 Dr. Orji Uzor Kalu has discredited Government’s plans to enter into any negotiation or amnesty with bandits, saying ‘you don’t negotiate with criminal elements, rather you smoke them out’, further stating that he would have used maximum force on the criminals if he was the president.

The former Abia State governor and current Chief whip of the senate made this assertion in Minna shortly after meeting with the former military president, Gen. Ibrahim Babangida at his Hill Top mansion, made it categorically clear that ‘if I were in charge, I will never negotiate with terrorists; never, they are terrorists and I will smoke them out.’

He, however, stated that in the next three months, the bandits would be shocked at what will happen to them, adding that the Federal Government is not sleeping over security challenges in the country.

‘The way out of the current problem we are facing is what the Federal Government is doing by replacing service chiefs. I am not going to say more. But, the bandits will be surprised at what will happen to them in three months.’

Senator Kalu said he was in Minna to commiserate with the governor, the two former heads of state, and people of Niger State over the current security challenges, especially the kidnap of the Kagara school children.

‘Niger State is like home to us. My two Oga’s (Generals Ibrahim Babangida and Abdulsalami Abubakar) are here. It’s enough for me to come. We heard what happened and we came to see them, we are praying along with them for peace to return to the state,’ he added.

At the residence of General Abubakar, Kalu charged former leaders in the country to offer their wealth of experience to help address the present criminal activities across the country, adding that, ‘the security challenges is getting serious and a big challenge to our country, something needs to be done and very quickly. Nowhere is safe in the country, it is not a question of north or south, all Nigerians are concerned, we need to nip it or else our country will become a place where hoodlums will take over everywhere.’