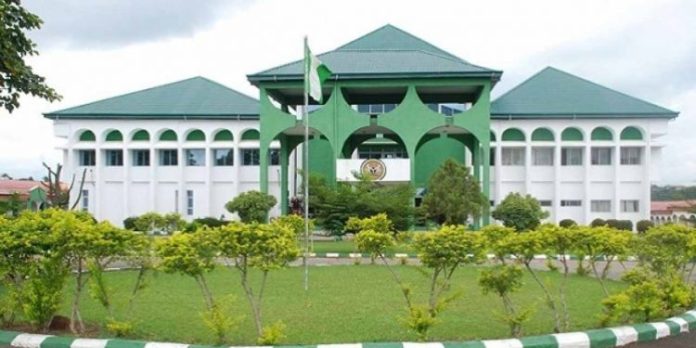 The Abia State House of Assembly says the Representative of Kogi West Senatorial District in the National Assembly, Senator Smart Adeyemi has exhibited the height of legislative rascality for pouring invectives on Governor Okezie Ikpeazu.

The Abia lawmakers called for an urgent examination of Smart Adeyemi’s state of sanity by his choice of words on the person of the Executive Governor of Abia State.

In a press statement signed by the Speaker, Rt. Hon Chinedum Orji, on Thursday, the Abia Assembly demanded an apology from Senator Adeyemi to the people of Abia State and the Governor within seven days from the date of the statement.

The lawmaker who made the remark while contributing to a motion on the Safe School Initiative in Nigeria on the floor of the Senate had said Abia State was being governed by drunkards.

Adeyemi said while some governors were committed to the welfare and protection of their people, Abia was ravaging in poverty.

But,the Abia House of Assembly, in a statement said, ‘the attention of the Speaker, Abia State House of Assembly, Rt Hon Chinedum Enyinnaya Orji, MNSE, has been drawn to the statement credited to one Senator Smart Adeyemi from Kogi State describing the Abia State Governor, Okezie Victor Ikpeazu Ph.D in very unsavoury, disrespectful and unprincipled terms and wish to state as follows:

‘That same Senator Smart Adeyemi apologizes to the people, and Governor of Abia State within 7 days from the date of this release failure of which the full paraphernalia of parliamentary framework through the relevant bodies shall be deployed to reciprocate such infantile vituperation unbecoming of a Senator of the Federal Republic of Nigeria’

‘That never has any person from Abia State openly insulted the Kogi State Governor under any guise and wondered why Senator Smart Adeyemi decided to descend to the gutters of vituperation, thus desecrating the sanctity of the National Assembly’

‘That failure to apologise to Governor Okezie Victor Ikpeazu and the people of Abia State who he has dared to test their resolve, within the stipulated period, the consequences shall be better imagined’

‘That Abia State cannot be ridiculed by anyone, no matter how highly or otherwise placed’

‘That Senator Smart Adeyemi should make hay while the sun shines’.