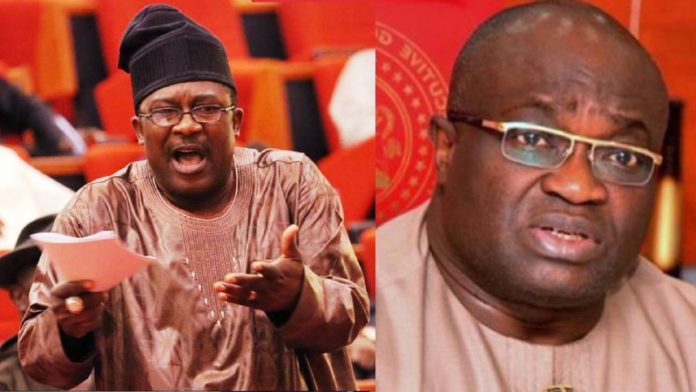 The secessionist group known as the Movement for Actualisation of Sovereign State of Biafra (MASSOB), yesterday, issued a strongly worded three-day ultimatum to senator Smart Adeyemi to publicly apologize to Abia State Governor, Okezie Ikpeazu and Ndigbo for his comment against the governor on the floor of the Senate or face the consequences.

Senator Adeyemi has been intensely criticized since he described Ikpeazu as a ‘drunkard’ earlier in the week while contributing to a debate in the Senate.

Reacting to the statement which it said was an unprovoked insult and abuse against the governor, MASSOB condemned it in strong words and warned that if Adeyemi fails to apologize within the time, he would be sanctioned in Igboland.

In a statement by MASSOB Leader, Uchenna Madu, the group said: ‘According to records available to us, this is not the first time Adeyemi and his sponsors have picked on Igbo leaders for abuse because of their inane hatred and disdain for Ndigbo, especially those seem to be doing well in the development of Igbo land.

‘Abia State has rated the best third state for foreign investment and economic stability in Nigeria.

‘MASSOB views this unprovoked assault on the person of a sitting governor in Igbo land as an insult to Ndigbo. We can never accept it, they are desperate to discredit Igbo leaders because of the 2023 general election.

‘MASSOB, therefore, warns Adeyemi that he has three days to publicly apologise to the governor and Ndigbo or risk sanctions, including being declared persona non-grata in all parts of Igbo land.

“We understand that Adeyemi is being driven by his perceived hatred against Ndigbo or have been sponsored by the enemies of Ndigbo for political reasons because he is aspiring to be the next governor of Kogi State but we wish to warn him and others who lend themselves to be used against the aspirations of our people that we are ready for them.

‘There is no nation in the world that will make progress while attempting to keep one part of the country down and this explains the lack of progress witnessed in Nigeria since the end of the civil war. This same issue is at the heart of our struggle to actualize our sovereign state of Biafra where Ndigbo can flourish without anyone seeking to keep us down or abuse our leaders.’

MASSOB was full of praises for senator Enyinnaya Abaribe for his eloquent representation of Ndigbo, noting that his consistency and unshakable spirit was worthy of emulation and a driving force for their self-determination struggle for Biafra actualization.