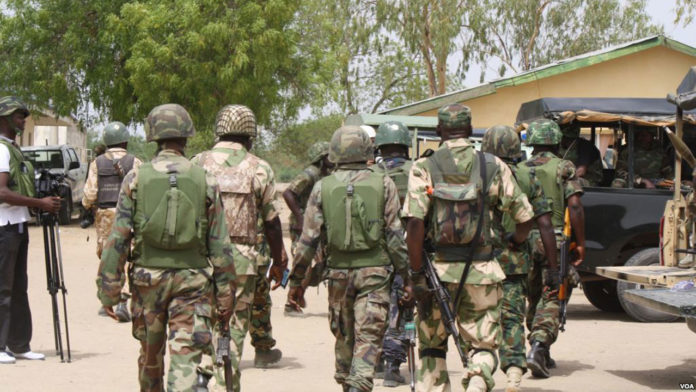 The Nigerian Army has revealed that it has recovered the remains of four its soldiers who were allegedly killed by members of the Indigenous People of Biafra (IPOB) in Orlu, Imo State.

A top military source confirmed the development to newsmen on Wednesday.

A vehicle damaged during the attack has reportedly been found.

IPOB militia had ambushed the soldiers on the escort of the Director of Civil Affairs, Brigadier General H. E. Nzan.

General Nzan and an Army team were said to be on an inspection trip to the Civil-Military Project at Nkwerre.

Read Also: ‘Like Jesus, I’m Tempted To Back Out Of Biafra Struggle’ – Kanu

The attackers took away the slain soldiers’ rifles and their vehicles.

After the incident, a joint operation was carried out in Orlu by the Army, Air Force and the Police.

On Monday, troops arrested 20 alleged members of IPOB over attacks on security agents.

Meanwhile, spokesperson of the Nigerian Army 82 Division, Colonel Aliyu Yusuf has condemned footage on an alleged plan by soldiers to attack women and children in Orlu Market.

Yusuf said the fake video is being circulated on social media to hoodwink the public.