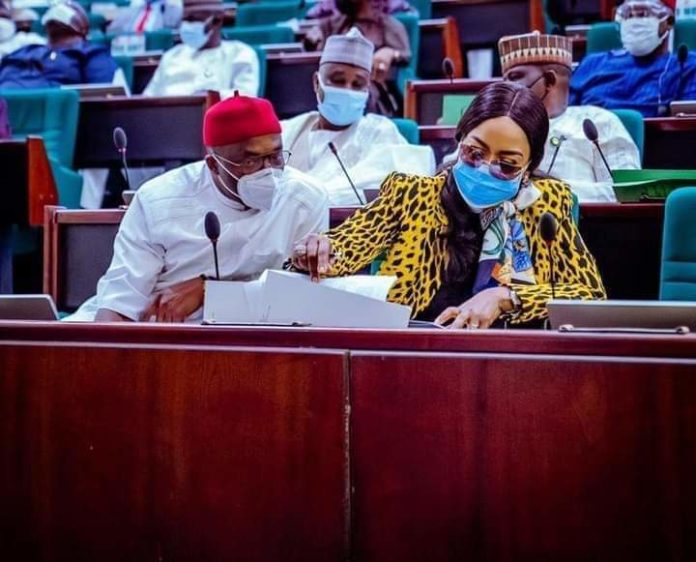 The timely motion titled, ‘Need to Address the Worsening Security Situation in Isuikwuato/Umunneochi Federal Constituency, Abia State’ was moved on the floor of the house on the 18th of February, 2021.

Read Also:  Air Strikes: ‘They Have Finally Brought The War Upon Us’ – IPOB

During the debate, the Deputy Chief Whip, Hon Nkiruka Onyejiocha took time to explain to the House that there is an increasingly disturbing security situation in and around Isuikwuato and Umunneochi Local Government Areas of Abia State which, unless urgent steps are taken, may degenerate to chaos and lawlessness.

Further speaking she stated that virtually all roads that lead to the Areas have been taken over by criminals, killer herdsmen, and bandits who lay siege on the people of the local government areas, maiming, robbing, kidnapping, raping and killing the people and travellers.

Continuing she said, ‘the victims of those murderous gangs range from poor peasant farmers, old and young people, travelers, traditional and political leaders, among others and a case in point is that of one Mr. Obiajulu Okafor who was kidnapped, together with his wife and driver, on 2 January 2021, which forced his family to pay a ransom of twenty–two Million Naira (N22m) to secure their release’

On his part, Rep Benjamin Kalu while seconding the motion, expressed worry because according to him the people can no longer go to their farms or engage in other means of gaining a livelihood for fear of being abducted, raped, or killed by herdsmen and criminals who have taken over their farmlands and roadways.

According to the Lawmaker, Hon Benjamin Kalu, unless urgent and drastic measures are taken to halt the tide and combat those criminal elements terrorizing the constituency, calamity may befall the areas as the people may tend to take the laws into their hands, which may lead to a state of anarchy.

The House in its wisdom resolved on the following :

(i) Urge the Inspector General of Police to prioritize the security of those local government areas and arrest the criminals terrorizing the constituency;

(ii) also urge the various security agencies to collaborate for the purpose of ensuring a safe and conducive environment in the constituency;

(iii) mandate the Committee on Police Affairs to ensure compliance.