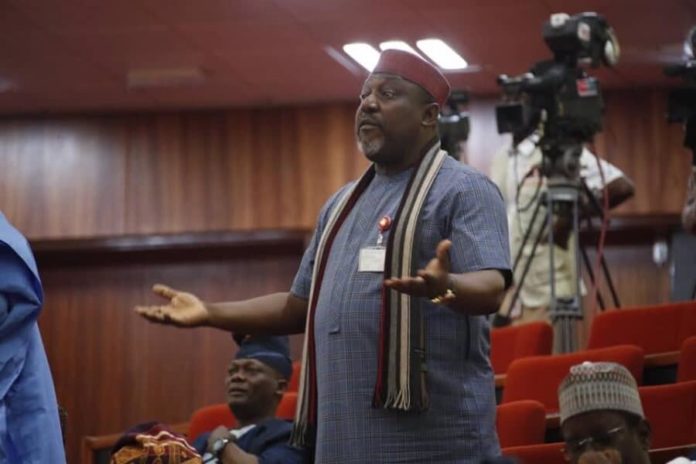 Youth organizations in the South-East under the aegis of Coalition of South East Youth Leaders (COSEYL), has called on Governor Hope Uzodinma of Imo state to prosecute Senator Rochas Okorocha for allegedly claiming possession of the Eastern Palm University, Ogboko and also ensuring the property is totally recovered from the Orlu-West senator.

A statement by COSEYL President-General Goodluck Ibem and Secretary-General Kanice Igwe to newsmen in Owerri described the action of the former governor as greed and selfish.

Ibem said: ‘We are alarmed over the broad daylight fraud by Senator Rochas Okorocha to convert Eastern Palm University, EPU, Ogboko solely financed and registered by the National University Commission (NUC) as the 42nd State University in Nigeria to his private property. This fraudulent act by Okorocha should not go unpunished.

‘Okorocha has just displayed that he is a greedy man carrying an Elephant on his head and still uses his legs to collect a snail from the ground. What a shame.

‘It is very unfortunate that a man who was elected by the people at the polls to serve and improve the lot of the state will turn around to loot the state dry.

‘Okorocha has proved that he is a man without conscience and should be prosecuted immediately by the state government to serve as a deterrent to those who might want to steal the people’s Commonwealth in future,’ Ibem stated.

Speaking further, the youth group also asked Governor Uzodinma to probe the past administration of Okorocha and bring him to justice if found guilty.

He said: ‘We call on the state government led by the dynamic and able governor Distinguish Senator Hope Uzodinma to dig deeper and investigate thoroughly the dismal tenure of Okorocha in order to unravel how state funds were disbursed and recovered any Kobo or property that was looted by that administration because it lacks all the tenets of a democratic government,’ Ibem claimed.