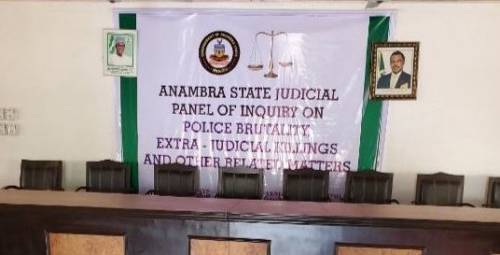 All five members of the Anambra State #EndSARS panel have jointly tendered their resignation letter, berating Governor Willie Obiano for ignoring the panel and for the rising cases of human rights abuses under his watch.

The five-panel members in their joint resignation letter, dated February 13, 2021, noted that police brutality, extortion, and even extrajudicial killings had remained unchecked in the state, even as the ‘notorious Special Anti-Robbery Squad (SARS), Awkuzu, and numerous other police outfits in Anambra State have become infamous around the world for outrageous, unconscionable, and iniquitous violations of the fundamental rights of Nigerians, including the right to life’.

Their letter said, ‘Permit the undersigned to first express gratitude to you and the government of Anambra State for finding us qualified to be appointed into the Anambra State judicial panel of inquiry into the allegations of extrajudicial killings by the defunct SARS, police brutality, and other public complaints against the Nigerian police.

‘It is imperative to mention that Anambra State, under your watch and that of your predecessor, was the cynosure of police brutality, extortion, and even extrajudicial killings in Nigeria.

‘The notorious Special Anti-Robbery Squad, Awkuzu, and numerous other police outfits in Anambra State have become infamous around the world for outrageous, unconscionable, and iniquitous violations of the fundamental rights of Nigerians, including the right to life.

‘Following the EndSARS protests that occurred in many states in Nigeria in the last quarter of 2020, we felt that perhaps the Anambra State Government may have become penitent and was willing to competently take up its duty of securing the lives and properties of its residents.

‘Sadly, the sittings of the panel were characterized by inefficiency and poor organization because the Anambra State Government failed woefully to adequately provide for logistics for anything at all involving the proceedings of the Panel. There was no funding to enhance clerical or secretarial functions of the Panel, no provision for security or witness protection.

The panel members said they were, however, convinced that the Anambra State Government had no regard for the victims of the many human rights violations by the police in the state.

‘The government has totally ignored the panel and had simply set up the panel to play to the gallery. Many victims of abuse of police powers and other interested stakeholders have been communicating with the panel secretariat or its members in a bid to know why the panel is no longer sitting despite more than 250 petitions which have been unattended to.

‘All these inquiries have failed to yield concrete answers and the government despite being aware of the interest of the public is showing no signs of interest in the activities of the Panel.

‘We firmly refuse to be pawns in the game of the government, so we hereby resign our appointments into the Anambra State Panel and completely dissociate ourselves from all the charade put up to give lip service to the plights of residents of Anambra State.

‘The undersigned are fully aware that our position expressed in this correspondence may expose us to blackmail and intimidation, but we are determined to say the truth,‘ it said.