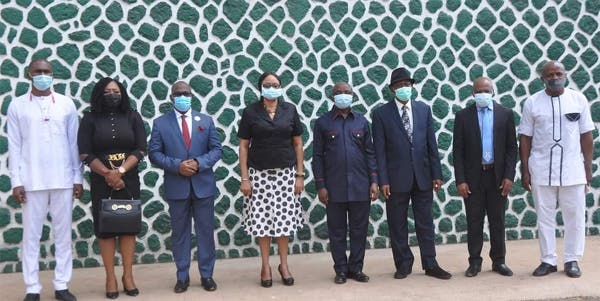 Enugu State Governor, Ifeanyi Ugwuanyi yesterday, inaugurated the newly constituted board of the state water corporation to improve water supply in the state.

The board, headed by a foremost consultant in the water industry and the first managing director of the corporation, Innocent Diyoke, will drive the government’s sustained programmes towards ensuring an adequate supply of potable water in the state.

Ugwuanyi, represented by his deputy, Cecilia Ezeilo, disclosed his administration, since its inception, has made concerted efforts in tackling the challenge of water supply in the state.
Some of the efforts, according to the deputy governor, include the initial injection of N100 million to increase the output of water supply to the Enugu metropolis as well as the N170 million used for the maintenance of water facilities at Ajali and Oji River water schemes, to further boost supply.

Ezeilo, who stated that Ugwuanyi’s administration captured the rehabilitation of the 9th Mile Crash Programme Water Supply Scheme with solar-powered boreholes in the 2021 budget, disclosed the state government recently awarded an N600 million contract for the project aimed at boosting potable water supply from the Oji River, Ajali and Iva Valley water schemes to Enugu metropolis and environs when completed.

Revealing that the state government targets production of 40,000 cubic meters of water, the deputy governor highlighted other efforts of the present administration to also include the commencement of AFD-funded 3rd National Urban Water Sector Reform Project, the integration of Adada Water Scheme, and rehabilitation of other water schemes as well as reticulation, drilling of new boreholes with storage facilities across the state.
Ezeilo said the government has commenced processes for the new Okwojo Ngwo boreholes augmentation in Udi Local Government Area to Enugu metropolis, a network of ten solar-powered boreholes and a newly conceived design that would help boost water production and distribution to Enugu metropolis and environs.

Responding on behalf of other members of the board, Diyoke assured the governor they will do their best to meet the requirements and expectations of the people with respect to water supply.