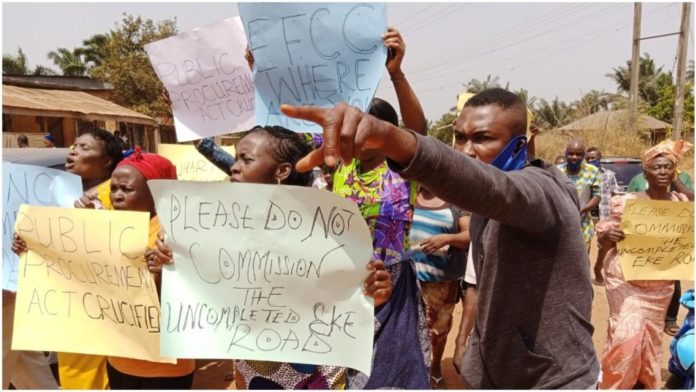 A new dimension has emerged on the controversies over the Federal Government’s ecological fund project in Eke Community, Udi Local Government Area of Enugu State.

The Eastern Updates had reported that the commissioning of a road project in the community by the federal government delegation was greeted with protest.

Members of the community had said no such project was done in their area by the federal government, and as such there was nothing to commission.

But giving another side of the story, another section of the community said the Ecological Fund project was righty completed in the area.

A community leader, Mr Onyeka Nwabuisi described the fraud claims as the peak of blackmail and needless politicking.

Addressing journalists, he said some members of the community merely decided to play politics over the project.

According to him, ‘what we have is a situation of crying wolf where there is none; I’m aware that the road project in question was attracted by the Honourable Minister of foreign affairs, Mr. Geoffrey Onyeama.’

‘But what happened was that while take-off of the project was delayed, the minister also approached the Enugu State government and work was approved on the same road. The State government started work immediately. Shortly thereafter, the Ecological fund office gave its own approval.’

‘However, they came and saw that work was already on-going; they planned to take the project to another state. It was at that stage that the minister begged them to do the project in other areas within the community and the LGA instead of taking it to another State. That was exactly what happened. So, at the end of the day, it was a blessing in disguise as the community got other roads.’

‘It is sad that some people chose to play politics with everything. I want people to go there and find out if the State government has not done the road they are protesting about; what is left is just a few metres where they are doing drainage.’

While thanking the Federal and the Enugu State Government for their various interventions in the community, he urged the public to ignore the unfounded claims by a few individuals.