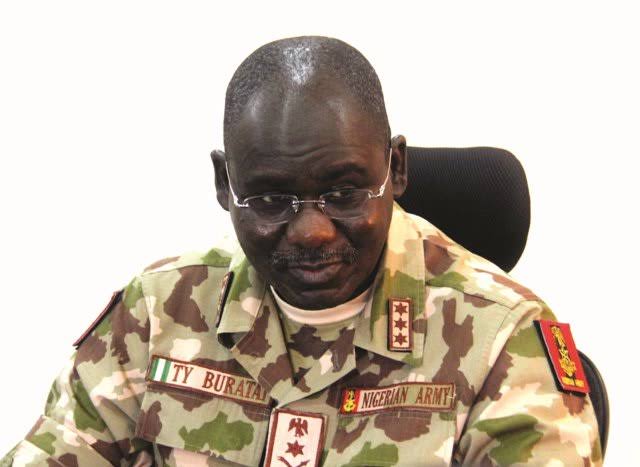 Their lawyer, Barrister E. R. Okoroafor, had reportedly said that the army authorities and Buratai would be served the court papers in the coming week.

Okoroafor stated that he was at the ICC in the Hague, the Netherlands, where he personally made the application, adding that he did not expect the army to own up to the incident insisting that the world court would decide.

A coalition of civil societies in the South-East had in a release on Monday alleged that six soldiers, attached to the Armoury Department of the Mogadishu Cantonment, Asokoro, otherwise known as Abacha Barracks, Abuja, were secretly tried and executed under Buratai’s watch.

Emeka Umeagbalasi, the Board Chair, International Society for Civil Liberties & Rule of Law and Prof Anthony Ejiofor-Chairman of the World Igbo Congress in the United States, among others, had signed the report saying that the soldiers, of South-East extraction, were not given a fair hearing before their alleged execution.

The activists had given the names of those allegedly executed as; Prince Ukwuoma, Ebube Isaiah, Amos Azubuike, Ekene Ebere, Moses Anyim and Godwin Uchendu.

The Nigerian Army had described the report as “fake news” and “malicious publication.”

The Director, Army Public Relations, Brig Gen Sagir Musa, in his characteristic manner, had labelled the incident as “gutter news” but failed to give details of the whereabouts of the soldiers and what truly transpired.

Only on Thursday, President Muhammadu Buhari appointed Buratai, and the outgone service chiefs as non-career ambassadors, forwarding their names to the National Assembly for confirmation.

Speaking with reporters on the incident, the lawyer representing the families, Okoroafor, who spoke from the United States and noted that he was in Abuja only last week, stated that he stood by his claims and he did not expect the army to accept the claims.

Okoroafor said, ‘I do not expect them to own up. As a matter of fact, when they denied the Obigbo massacre but between then and now, we have been able to bring out 100 victims.

‘I am in contact with family members. I was actually contacted by one of the brothers of the slain soldiers. But because of the porousness of the country, we don’t want to expose them to unnecessary harm.

‘When we get to ICC, we are going to present their family members. We filed the case on Thursday. Before next week, they will be properly served.’

The army has tagged the news report as fake news and mischievous publication, but some Nigerians are asking the army authorities to disclose if they ever had as some of their troops the six people identified as victims and if yes, they should show them to the public if they are indeed alive.