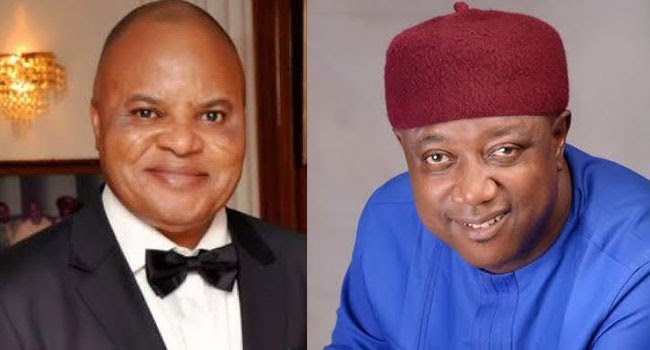 The decision on who should claim the victory of the All Progressives Congress (APC) in the last by-election in Imo North Senatorial District, Imo State would be made by the Supreme Court on or before February 7 this year.

This became public on Monday at the mention of three appeals filed before the Supreme Court by parties interested in the issue.
The first appeal marked: SC/971/2020 which was filed by Senator Ifeanyi Godwin Araraume against Lady Uchenna Onyeiwu Uba and four others; the second, marked: SC/971/2020, also filed by Araraume against Chukwuma Frank Ibezim and others, and SC/1060/2020 filed by Dr. Edith Chidimma Uwajumogu against Chukwuma Frank Ibezim and others.

Recall that the Independent National Electoral Commission (INEC) returned the APC winner of the by-election held on December 5, 2020, in the Imo North Senatorial District.
It however did not return a candidate for the party on the grounds that there were many court decisions for and against the two main contenders from the APC- Ifeanyi Araraume and Frank Ibezim.

When the appeals were called on Monday 1-2-2021, and upon enquiry from the court, Ahmed Raji (SAN), who led Araraume’s legal team, told the court that the three appeals were on the same issue.
Although lawyer to one of the respondents in the second appeal, Robert Emukpoeruo (SAN) said the appeal involving his client was slightly different, Raji insisted the appeals were all about the dispute as to who ought to be the authentic candidate of the APC for Imo North Senatorial District of Imo State.

On when the appeals would lapse, being pre-election related, Raji said February 7 this year.
A five-man panel of the court, led by Justice Amina Augie then elected to hear the first appeal, for the other two to abide by the decision reached.
Justice Augie assured the parties that all issues would be considered in the single judgment to be rendered.

She frowned at the application for joinder filed by Chino Obiagwu (SAN) on behalf of the Peoples Democratic Party PDP
Justice Augie noted that the PDP has no business in a matter relating to APC’s internal affairs.
She advised the PDP to direct its energy to the election tribunal if it was interested in challenging the outcome of the election.