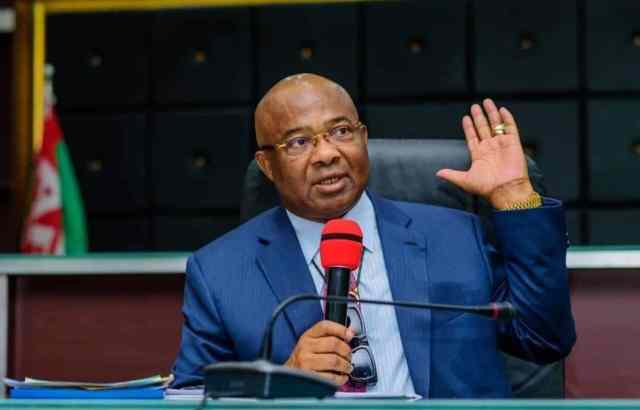 The leadership of the Imo State chapter of the People’s Democratic Party (PDP) has called out Governor Hope Uzodinma over what it describes as his ‘demeaning and debasing’ address to state workers.

Faulting the governor the party stated that rather than resort to abuse that the governor should attend to the genuine demands of Imo State civil servants.

Organised Labour in the state had back in December declared a warning strike over the nonpayment and irregular payment of salaries.

Responding, the state governor had closed down the state secretariat and sent the workers home as a preemptive measure to thwart the impending strike action of workers.

Governor Uzodinma had in his broadcast to the state on Friday warned Imo workers against being instruments in the hands of labour leaders who are being used by politicians, stating that ‘if workers decide to join a baseless strike action he/she should not be in any doubt that there will be no salary at the end of the month. Our policy is simple “no work, no pay’, which is in accordance with international Labour Law provisions, section 43 of the Trade Disputes Acts.’O

Responding to the governor’s statement, the PDP, in a statement signed by spokesman Hon Ogubundu Nwadike, said:

‘Our great party finds it extremely unacceptable for the governor to describe the workers in very uncouth diction. We recognise that among the workers are high profile intellectuals, technocrats and professionals, whose efforts have continually kept this state standing among the comity of states in the federation. Addressing them like common dimwits is least expected from Governor Uzodinma. A public apology from the governor to the workers will not be too much.’

‘This party notes with consternation that all the Organised Labour in Imo State has done is to tender the normal demands associated with labour unions. They have, inter alia, asked Governor Uzodinma to stop all forms of non-payment of salaries, all forms of underpayment of salaries, all forms of staggered payments, and the commencement of the payment of the new minimum wage of N30,000, among other lawful demands. That they now wish to embark on a strike is not unlawful or illegal. It is allowed.

‘Imo PDP deems it an abuse of core aspects of the fundamental human rights of the workers in the state for Governor Uzodinma to be demeaning and debasing them with bad words and utterances.’

Commenting further, the opposition party said: ‘We, therefore, task the governor to as a matter of urgency go to the round table with the workers and iron things out with them amicably, and seriously look into their demands. As has been proved by the PDP Rebuild administration led by His Excellency, Rt Hon Emeka Ihedioha, CON, relating well with Imo workers is not rocket science, but a possibility.’