HomePoliticsDon't Destabilize The South-East - Ohaneze Youth To CAN
Politics

Don’t Destabilize The South-East – Ohaneze Youth To CAN 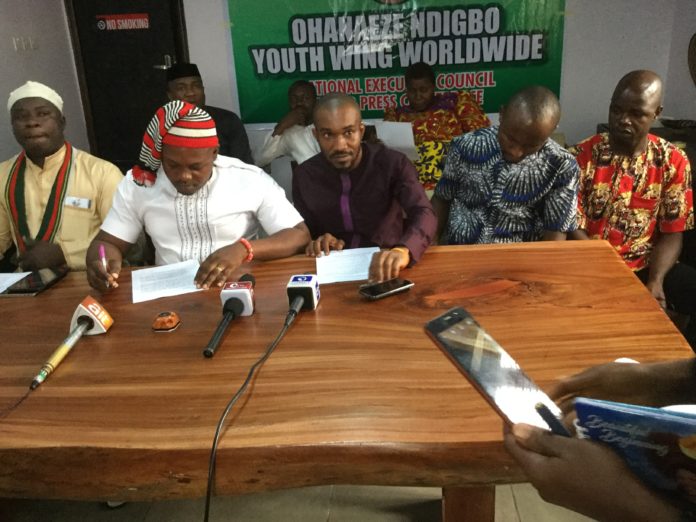 The youth wing of Igbo socio-cultural organization, Ohanaeze Youth Council, OYC, has sent out a warning to the Christian Association of Nigeria, CAN, against aiding destabilization of the South-East geopolitical zone.

The group said this in a communique issued by the National Executive Working Committee of Ohanaeze Youth Council called on CAN to refrain from any attempt to set a bad precedent in Igbo land.

The call was made after the group’s meeting in Owerri, on the emergence of Professor George Obiozor as the new President General of Ohanaeze Ndigbo.

The socio-cultural youth body also called on the new President General of Ohanaeze Ndigbo, Professor George Obiozor to extend an olive branch of peace to all aspirants

The Igbo group further urged Senator Rochas Okorocha to prevail on the factional President General of Ohanaeze Ndigbo, Chief Mike Ibeh to withdraw from impersonation in the interest of the Igbo nation.

Parts of the communique stated, “Senator Rochas Okorocha should understand the power of dialogue and peace by withdrawing Mr. Chidi Ibe from insulting the sensibilities of the most powerful race in the world ‘Ndigbo‘ and join forces with his brother, Prof. George Obiozor for the economic development of Alaigbo.

‘Senator Rochas Okorocha(Owelle Ndigbo) should not in any way be part of those destabilizing Alaigbo but should understand that the unified interest of Ndigbo in 2023 is Nigeria President of Igbo extraction, which no one will doubt his capacity.

‘All the aggrieved individual or group on the outcome of the election of Ohanaeze Ndigbo should articulate their proposal on how to make Alaigbo economically viable and great and submit to Prof. George Obiozor who has accepted to unify Ndigbo for economic purpose.

‘Igbo youths through our long-aged suffering, neglect, injustice, killing of our pro-Biafran youths(IPOB & MASSOB) by Nigeria government, marginalization, and unemployment would not tolerate any individual or group with selfish interest to undermine the collective interest of Ndigbo. We have defined a way to get rid of such personalities or groups from Igbo land for it is no longer going to be business as usual’.