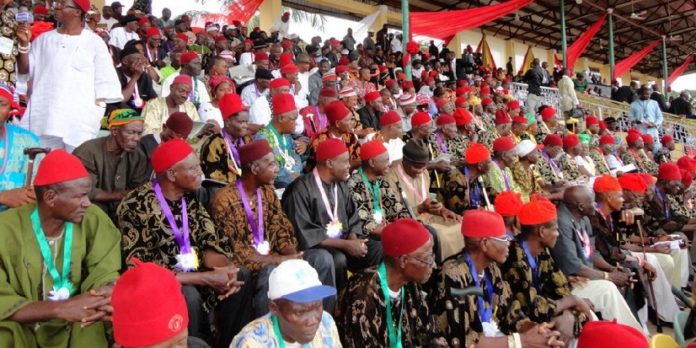 A Pan-Ohanaeze Ndigbo socio-political organisation, Known as the Coalition of South East Professionals Network in Nigeria and Diaspora (CNEPNND), has declared that the South-East stands in good stead to produce the next President in 2023 and it should not allow the activities of the indigenous people of Biafra (IPOB) to undermine its chances.

The group, however, alleged that desperate politicians feeling threatened by the chances of Igbo to produce President are sponsoring Leader of the Indigenous People of Biafran (IPOB), Nnamdi Kanu, to scuttle the bid.

CNEPNND National President, Prof. Madumere Chika, and National Secretary, Anayo Uchemba, in a statement on Friday, further condemned the activities of Kanu and appealed to South-East governors and the leadership of Ohanaeze Ndigbo to rise against the proscribed group by denouncing it wholeheartedly.

Prof Chika maintained that the region must be vigilant and not succumb to Kanu’s antics of speaking or carrying out his actions on behalf of the region.

‘We wish to authoritatively say that Mazi Nnamdi Kanu is not working for the interest of Ndigbo, rather he is being bankrolled by a certain Nigerian politician who is contesting the 2023 presidential elections from the South against the Igbos.

‘We are vindicated by the findings and happenings around Mazi Nnamdi Kanu, the fugitive leader of IPOB, and we call on all Ndigbo around the World to distance themselves from this Kanu and his terrorist group.

‘This politician is doing this through some of his key aides to cause disaffection in Nigeria between the Igbos and other regions of our country.
‘The politician, having realized that the general mood in the country now is the high sympathy Nigerians have for Igbo people in 2023 general elections, decided to employ this method to set Ndigbo up against Nigeria and we must not allow this.

‘Nnamdi Kanu held several meetings with these people in the month of December in France and another meeting on the 10th and 11th of January 2021.

‘This is why we have always warned people on the character of Nnamdi Kanu and IPOB, that they are on a self-serving mission and not an Igbo agenda.

‘Kanu is working with some fifth columnists who are out to Robb Ndigbo of the presidency come 2023. We must not allow this fugitive to succeed.

‘We are aware that apart from the little dues IPOB extorts from members and sympathizers, his major funding comes from these desperate politicians.

‘Their aim is to portray the Igbos as enemies of Nigeria who don’t deserve the presidency. The simple logic is that you can’t be fighting for the presidency of a country you do not believe in.

‘This is the evil agenda these politicians are trying to sell to Nigerians using our own very son. We must never allow this evil plot to succeed.

‘Kanu cannot trade the destinies of Igbos for his own personal comfort. It must be clear that Kanu does not love Ndigbo as he claims. Rather, he is our enemy.

‘As Igbo professionals, we wish to inform all that Kanu is alone in his cessation project and has no reasonable person behind him,’ he said.

Aside admitted that the South East region had not had its fair share in the one Nigeria project, he stressed the pursuit of an inclusive government must be channeled through appropriate lawful means.

‘Through our people are highly marginalized and deserve the right for agitation, but that must be done legally and by the appropriate people not a deviant young man like Nnamdi Kanu who is out for his selfish interest.

‘Kanu has always lamented the treatment of people from the South-East zone by the Nigerian government and by other Nigerians. This formed the reason for his agitation for a country of his own.

‘However, while Kanu has a right to legally clamour for whatever he believes in, he should also know that the Igbo Nation has recognized spokespersons in the forms of the governors, legislators and Ohaneze Ndigbo, the apex Igbo socio-cultural group. Any serious statements are supposed to come from these people after extensive consultations.

‘Igbo people deserve the Presidency this time around. They have all it takes to produce the next president of Nigeria and that is what we should be pushing for now with one strong voice in unity and sincerity of purpose.

‘We cannot be demanding for president of Nigeria on one hand and on the other hand, supporting IPOB which is being fraudulently financed by Kanu and his agents to destabilize a united Nigeria through cessation and a parallel security organization.

‘We are therefore calling on all Ndigbo worldwide to rise up against Kanu and everything he stands for.

‘We also call on all South-East governors to initiate mass community advocacy against Nnamdi Kanu and IPOB.

‘We finally call on all Nigerians to ignore the activities of Nnamdi Kanu and IPOB as they do not represent what we are in the South East and can never be. A fugitive like Kanu cannot speak for us,’ he added.