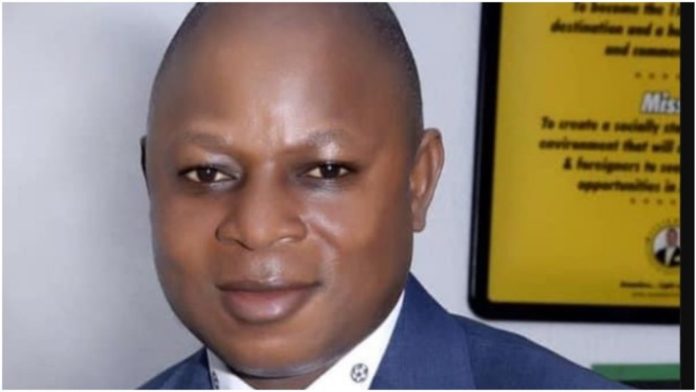 A commissioner with the Anambra State government, Dr Christian Madubuko has resigned his appointment, alleging threat to life and sabotage.

Madubuko who last worked as the Commissioner for Art, Culture and Tourism turned in his resignation letter, saying that the sabotage he has seen while working as Commissioner in Anambra is the reason it is difficult for Nigeria to develop.

He was known to have had a running battle with a fellow Commissioner, Mr Uche Okafor of the transport ministry, a battle which many believed he was bound to lose as Okafor was related to the wife of the governor, who is believed to be in charge of the state.

In his resignation letter, Madubuko charged Governor Obiano to quickly wake up and take charge of the government.

FULL TEXT OF RESIGNATION NOTICE
My dear colleagues, l wish to officially notify you of my resignation. I have on the 11th of December 2020 resigned my position as Commissioner. It is my pleasure to thank all of you for the time we spent together in the service of our state. Indeed, it was a three years of action-packed lessons both positive and negative.

I must sincerely thank the Governor for the opportunity to serve. When l was appointed Commissioner in 2018, the Governor directed me to block all revenue leakages.

That l did without looking at faces. In the cause of fighting corrupt individuals holding the State revenue on the throat, all manners of frivolous petitions against me were written to the Governor accusing me of several misdeeds particularly distablising our party, APGA and advising the Governor to remove me before l do more harm to the party.

In several occasions, agents of darkness tried bribing me with milions of the naira. I arrested these criminals which was also applauded by the Governor at the exco meetings. Within this three years, l have been redeployed to three key ministries in the State as Commissioner. First, was as Commissioner for Industry, Trade and Commerce.

Second, was as Commissioner for Road, Rail and Water Transportation and finally as Commissioner for Diaspora Affairs, Indigenous Artworks, Culture and Tourism. In those Ministries, l performed above average. With all these hapenings, it became clear that when you fight corruption, corruption fights back in several forms.

I now understands clearly why Nigeria (nay Africa) can never develop like Europe. I came down from Australia to help in developing our state just like some of you were invited from different parts of the globe. True to my believe, l worked tirelessly to actualize that dream. In working to meet the target, we set – up Mobile Courts and jailed several revenue thieves and significantly raised the State revenue which were applauded by the Governor at various EXCO Meetings. I fought various parasitic interests and jailed many of them. I stepped on toes risking my own life for the survival of the State.

Those toes l stepped on are now in the prowl for my life. I am no longer safe as l speak. In three different occasions, l received baptism of fire by unknown gunmen/assassins. I was equally attacked severally at the Onitsha Main Market by the agents of the revenue criminals. All these attempts were to stop me from exposing the people involved in siphoning the State revenues into their private pockets to the detriments of the Anambra citizens.

I am particularly happy that the Governor acknowledged my positive and selfless contributions to the point of putting my on life on the line in the process of executing my assignments. During the COVID – 19 PANDEMIC, I and my team transvassed and crisscrossed around the state day and night to ensure we protect our people from the dangerous virus.

I recalled the Governor phoning me together with his wife around 3am during the pandemic drama requesting me to have a rest. The Covid Saga provides an example of how bad our system has become.

All our efforts to help the Governor from all angles were unfortunately hijacked and framed in the bad light by forces of inordinate ambitions and insatiable greeds. I watched my State being destroyed by a tiny cabals of renegades. I advice His Excellency the Governor, to rise up to the challanges of leadership and take charge of his Government.

This is because, at the end of it all, the Governor alone takes all the glory for things done right and blames for things done wrong. In summary, l have balanced all and brought all to mind and decided to leave, effective 11:59pm 31st December 2020.

Once again, thank you all and remain blessed. We shall meet again in higher echelon. HAPPY NEW YEAR to all of us.
Christian C. Madubuko, PhD.