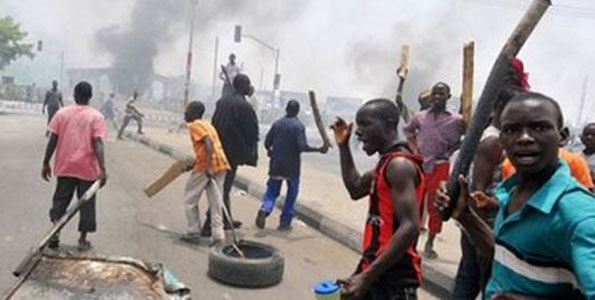 Some traders of Igbo extraction and Yoruba youths in Akure, the Ondo State capital, have engaged in a free for all following the alleged stabbing of a masquerade escort by an Igbo trader.

The incident was said to have happened at Oja Oba.

Witnesses said both sides engaged in a gun duel until security agents were deployed to the area to enforce peace and sanity.

An eye witness said trouble started when a boy serving as an escort of an unidentified Akure masquerade was stabbed by an Igbo man.

The witness said Akure youth mobilised to retaliate against the Igbos and it led to a fracas.

Chief Press secretary to the Deji of Akure, l Michael Adeyeye said the situation has been brought under control.

According to him, ‘An Igbo man stabbed an Akure man, while the Akure people re-enforced themselves at Odo-petu community.’

‘The man was injured and has been taken to a nearby clinic. The security men have handled the situation to restore peace.’

‘At this period, the Kabiyesi has finished every celebration. These fallout celebrations could be done without causing rancour or unrest in the town.’