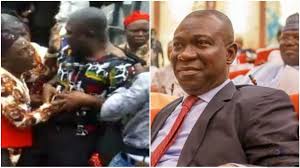 The IPOB members had been prosecuted for assaulting the senator from Enugu State and sentenced to 20 days of labour without pay in August.

Ekweremadu had in 2019 been beaten up by some Biafra agitators in Nuremberg at an event organised by the Ndi-Igbo Germany association for its Iri-ji (traditional festival). The video of the attack, which went viral on social media, was condemned by members of the National Assembly.

But the IPOB described the attack as a warning to ‘those engaged in selling (the Igbo’s) collective interest to Fulani caliphate.’

However, the attackers were later identified by the Bavaria police in August, 2019, following calls by the Nigerian embassy on German federal authorities to bring the perpetrators to justice.

It was also reported that the convicted IPOB members, who had since served their sentence, were not deported.

A source at the Nigerian embassy revealed that two of the attackers had initially filed an appeal against their conviction but later withdrew it.

‘It was only the four persons identified that were sentenced to 20 days of labour without pay. The sponsors were not identified so they were not prosecuted.’

It was learnt that though Ekweremadu was aware of the conviction and could institute a civil case against the IPOB members, he had yet to do so.

Under Section 102 (1), Chapter 3, of the German Criminal Code, attacks against institutions and representatives of foreign countries are punishable with fines and imprisonment.