Biafran War: Buhari Pay Us Our Pension – Ex-Officers Cry Out 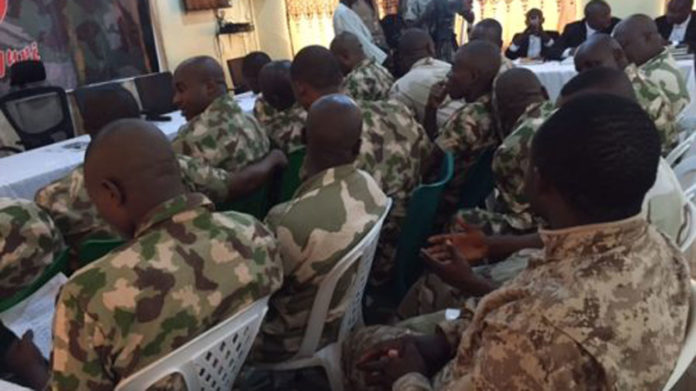 Retired military officers who fought on the side of Nigeria in the Biafra Genocidal civil war have appealed to President Muhammadu Buhari to commence payment of pension to their members in order to rescue them from poverty and untimely death.

The Soldiers who are of Ekiti State origin, are among those who retired voluntarily from the Nigerian Military after prosecuting the civil war of 1967 -1970 regretted that over 60 of their members, out of the 240 at the initial stage, had died due to poor medical conditions while more than 70 are suffering severe ailments without any financial help to address their horrible predicaments.

According to reports, the soldiers while addressing journalists in Ado Ekiti yesterday, under the aegis of Voluntarily Retired Military Officers (VRMO), 1978-1979, through its Publicity Secretary, Mr. Bello Oseni, urged President Buhari to honor his 2015 pledge to extend payment of pension to all retired officers that took part in the civil war.

Oseni appreciated the President for remembering them in 2015 after 36 years of neglect by successive military and democratic governments but demanded that he should honor his promise.

He said that Buhari had instructed the Military Pensions Board in 2015 to verify their documents to ensure that they were certified legitimate military officers. ‘But since then, we have not heard anything again. We appeal that this pledge should be implemented in due course.’

‘We started this struggle with 240 members, today we are 180 with about 70 of nursing severe ailments and only praying to get over.’

‘We were at the battlefield for over three years. We fought for the unity of this nation. We kept Nigeria one and we deserved to be taken care of.’

‘We have no regret serving our fatherland. But we are surprised that those who fought and rescued the nation from disintegration would be treated this way. Helping us at this stage will send a signal of patriotism to Nigerians because all we did was out of patriotic spirit.’

‘But we believe in the integrity of President Buhari. He is a retired military officer with a human face. He knew what it meant for somebody to fight a civil war. He understands the language of war.’

‘It was because of President Buhari’s passionate spirit that spurred him to invite us to Abuja in 2015. We plead that he fulfills all his promises to us so that we can reap the fruits of our labour.’

‘We pray that Nigeria remains together so that the labour of our founding fathers and war heroes, including us, will not be in vain,’ he said.