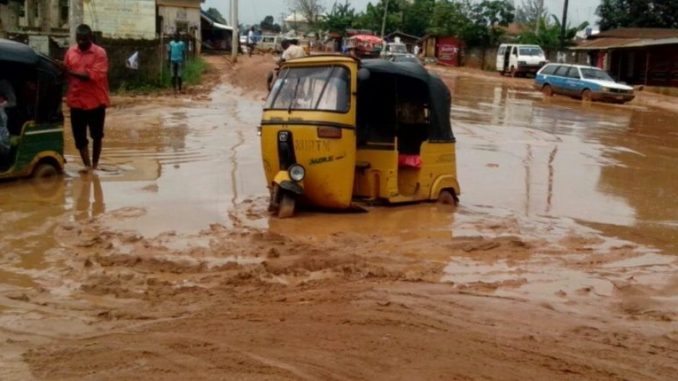 Women in Umudibia Nekede Autonomous community, Owerri West Council Area of Imo State have vowed to protest naked if the state government fails to repair the dilapidated Nekede-Ihiagwa roads which have become a nightmare to residents of the community.

Just as the state government has directed the Attorney General and Commissioner for Justice to press on the bank that guaranteed mobilization fee to the contractor handling the Nekede/Ihiagwa road that has become an eyesore with the rains to refund the mobilization fee without further delay.

The women said the road which leads to the two Federal institutions, Federal University of Technology, Owerri (FUTO) and Federal Polytechnic Nekede Owerri including a police college has become a source of suffering to parents, students, and motorists as ‘it is now impassable.’

According to a woman leader in the community, Mrs. Ifeanyiwa Martin the road has turned to a death trap as people constantly fall into the gutters covered by the mud each time it rains.

‘It is also difficult for us to drive through the muddy water or take our children to school. No vehicle or human being that passes the road without sinking,’ she told the Newsmen

However, the state Governor Hope Uzodimma has directed the Attorney General and Commissioner for Justice to commence a process of recovering the mobilization fee given to the contractor handling the road.

Rising from the weekly Executive Council (EXCO) meeting presided over by Governor Uzodimma, the government directed the Attorney General and Commissioner for Justice to press on the bank that guaranteed mobilization fee to the contractor handling the Nekede/Ihiagwa road to refund the mobilization fee without further delay.

Briefing newsmen after the meeting, the Commissioner for Information and Strategy, Chief Declan Emelumba, assured that as soon as the rain is over the government will re-award the contract for the construction of the said road to a competent firm.

Adding his voice to the briefing, the Commissioner for Finance, Mr. Chuck Chuckemeka said that the contract for the Nekede/Ihiagwa road was not an initiative of the current government, but that of the previous government.

He warned that any school head (Principal or Head Master) discovered to indulge in such activities will be summarily dealt with.

Also, the Commissioner informed that the Executive Council has approved the setting up a committee headed by the Commissioner for Special Duties, Barr. Francis Dibiagwu, to collect every relevant data on private primary and secondary schools in Imo State for the purpose of having reliable information that the government can plan with.

The EXCO equally reiterated her earlier stand on the ban on mining by any individual, company, or group of Companies in Imo State. It added that anyone engaging in mining or dredging in the State must first submit an Environmental Impact Assessment (EIA) certificate to the State Ministry of Environment for approval.

He equally said that the State Government is working hard to realize the passage of the 2021 Annual Budget before the end of the year so as to benefit from the gains that can accrue to states that meet the deadline for the timely passage of budget from the Federal Government or International Donors.