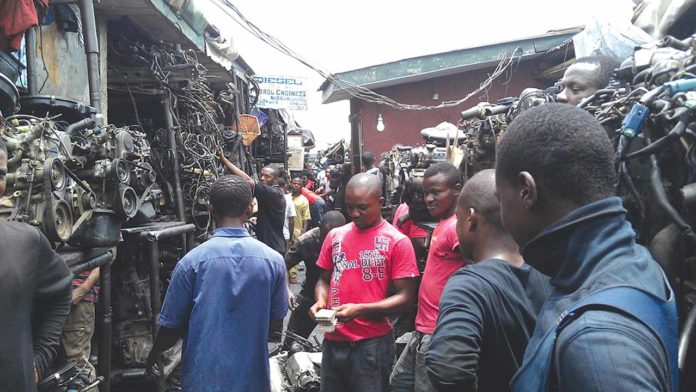 Much has been said about the uniqueness of the Igbo Apprenticeship system popularly called ‘Imu-Ahia’, which literally translates to ‘to learn market/ or a trade’. It has been considered as perhaps, one of the major factors that helped pull majority of Southeastern families out of poverty after the Nigerian-Biafran civil war.

Learning a trade has always been the norm with the Igbo people of Southeast Nigeria. An Igbo person believes in controlling his financial ‘destiny’ and the best way to guarantee this was through commerce and venture into business. The Igbo apprenticeship system has been able to keep most Igbo youths employed across generations and the Nigerian government can take a cue from it as they battle with rising youth unemployment and underemployment in Nigeria.

With the Yorubas, the apprentice, upon completion of their apprenticeship pays the master a ‘freedom fee’, buys drinks, and throws a party according to his/her financial abilities before they can graduate and get on with their trade officially. The period of apprenticeship is usually 2 – 3 years on average. The apprentice is usually presented with a certificate. The apprentice does not necessarily live under the care of his/her boss and is responsible for his/her own feeding in most cases. Conversely, in the Igbo apprenticeship model is a departure from the above. Apprentices join an established business person, leave their parents/family to live under the care and supervision of the master. The apprentice is often closely related to the master. They do not travel home during festivities to their family without the consent of the master even if the master and family are in the same city. Igbo apprentices also do other domestic chores in the house like car washing, ironing, and cleaning whenever they are not in the shop. They are appraised based on not just work ethic while learning and growing the master’s businesses but on performance in non-business related areas like respect for the master’s spouse/family etc. At the end of the apprenticeship, they are compensated with a take-off fund which they use for shop rent, goods, equipment (if needed) and in some cases, accommodation for a given period of time. This does not in any way prevent collaboration with the master despite being a competitor. In fact, in some cases due to the apprentice’s weak buying power, a master can assist with goods procurement for a former apprentice to help them reduce overhead importation/exportation cost.

This is the system that the Igbo use to create employment. For long, apprenticeship has been the backbone of Igbo business culture. Young men and women serve someone to gain knowledge of a particular business and then setup theirs with help from the master. Some of these apprentices are people who have capital to start a business but lack the business knowledge. Others have the knowledge but lack the capital while some are just unemployed. In all instances, the solution is to serve someone who is into the same line of business and is able to set them upon completion of the apprenticeship.

Apprenticeship among the Igbos helps both the master and servant. The master gets loyal extra hands while the apprentice learns the business and get settled after their service year(s). The master helps them establish their own business with the money he pays them as settlement. Some masters even connect their trainees with international contacts to help them be firmly established enough to operate independently. This system ensures there are more people doing a particular line of business and knowledge is passed on. It reduces the rate of business failure since young/new entrepreneurs get the requisite knowledge before setting up the business.

Taking a visit to popular markets like Alaba International Market, Trade Fair, Idumota, Lagos Island, Onitsha Main Market, Upper Iweka, Ariaria International Market, Nnewi Spare Parts Market, and many other places, you will find scores of Igbo men and women running businesses with young men and women serving and learning the secrets of those businesses with the aim of owning theirs in the future. Take for instance an average Igbo merchant who has boys and girls serving him, imports from China. He shows these boys and girls how to run and manage his kind of business. They learn how to discover, enlarge, control, and direct the market. Most importantly, he passes all of his financial and business education to his boys and girls in a language they understand and in a manner that universities may not give them. This merchant also has a plan to settle his apprentices when their time is up.

The Igbo apprentice system also creates a network of traders who are independent and have practical financial management knowledge, zero-capital entrepreneurship skills, principles of local and international trading, and people management. This knowledge, which can hardly be gained in a university, saves them from the costly trial-and-error business methods and risky experiments that can decimate capitals and ruin investments.

The Igbo apprenticeship system also has a way of checking bad masters. It equates the measure of a man with how well those under him fare. There are villages where a master who failed to establish his apprentices or has ex-apprentices not excelling in the business cannot speak in certain places. It is a mark of his own failure if they fail and an honour if they are progressing. A very good example of this culture is in Arochukwu where a wealthy man must begin by mentioning some sons of the land he has helped established as former apprentices before elders permit him to speak.

One may begin to wonder why the ‘Imu-ahia’ or the Igbo apprenticeship system has a high success rate despite the absence of economic structures and processes like Seed Rounds, Equity Splits, Venture Capital, and so on. First, as awkward as it may seem, apprentices avoid the malicious use of the master’s resources as it is believed that such actions could inhibit success in their own future businesses. This fear engenders honesty during the years of service as every proven act of theft, diversion of funds, and flamboyant use and wastage of business finances terminates the arrangement. There are cases of apprentices managing a business branch with little to no supervision. This ownership mindset that the success of the business is also theirs, in the long run, encourages them to commit enough sweat equity into it.

Secondly, no master would want to incur the wrath of the community back home, by failing to keep to the terms of apprenticeship after the agreed number of years of service. Following this is the fear of labelling. To be seen as a master with a reputation for not settling apprentices is a tag that lasts generations and the fear of the apprentice’s ‘Chi’ (a person’s personal deity in Igbo traditional belief) affecting the master’s fortune for not keeping their own side of the bargain after years of service. This informs the reasons behind accepting a small settlement package given with the master’s blessings rather than a fat but grudgingly-given one. To the Igbo person, the ‘Imu-ahia’ relationship is spiritual before being financial.

Considering this foregoing, Nigeria can make a good headway in tackling unemployment and lowering the rate of startup failure in Nigerian by aligning the Igbo apprenticeship system with modern forms of apprenticeship that exist in many businesses in Nigeria as an internship.

Too many youths are idle and unable to sustain businesses, even when given the capital to do so. They will certainly fare better if exposed to the effective apprenticeship system which does not require raising huge capital. It is a fact that most Igbo businesses are started on lean budgets.

The Nigerian government can work out a semi-formal arrangement based on the Igbo apprenticeship system that is the mainstay of Southeast Nigeria. It does not need much to empower the system because its products are ready to create value in the market. They are trained to be inventors in many business areas. Interestingly, most of them are not uneducated. While they may not all be university graduates, many have various levels of formal education with certifications and only decided to learn a trade after being unemployed for a long time. To them, acquiring business skills by serving someone positions them to better their economic fortunes as independent business owners. The evidence proves them right.

As of today, there is no Nigerian market that thrives without Igbo traders and their apprentices trying to break new grounds while enriching themselves. It is simply the Igbo apprentice system at work. If it is empowered, the Nigerian economy will benefit in many ways.

IPOB: Other Ways Of Dealing With The ‘Rotten Finger’