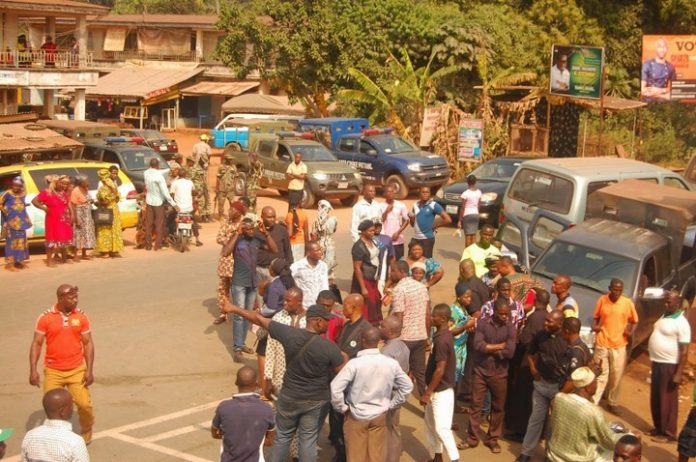 The people of Ifite Umueri community in Anambra East Local Government Area of Anambra State on Monrday protested alleged encroachment on their land by the state government.

The protesting three communities of Umuopu, Enuagu and Umuina Ifite Umueri, who made bonfire and blocked the road to the airport with placards, described the government action as a deliberate attempt to impoverish the people, who were predominantly farmers.

Read Also: Cry For Help From Flood-Ravaged Communities In Anambra

Some of the placards read: ‘We can’t be refugees and IDPs in our own land, Obiano leave our land for us’; ‘We’re farmers why collect our land to build housing estate’; ‘Anambra State government go to the portion of land given for the airport.’

Addressing reporters after the protest, the Chairman of Ifite Umueri Community, Chief Uchenna Ndumuanya, claimed that they gave the government 729.60 hectares for the airport project, but regretted that it had taken over 1901 hectares.

He lamented government adamant attitude in taking their land without consultations despite letters written to its officials, members of the House of Representatives and senators from the three zones of the state to complain against the encroachment.

Ndumuanya said: “We want to believe that the encroachment is not only to impoverish our people by the Governor Willie Obiano-led administration, but also an extension on the old acrimony between the Aguleri and Umueri communities. Some people are still engaged in that fight.

‘If it is not an extension of the fight between Umueri and Aguleri, why will a community give 729.60 hectares and the government has taken 1901 hectares and they were reminded with protests, yet they ignored us?’

‘The government know what they are doing. They want to make us refugees in our land.’