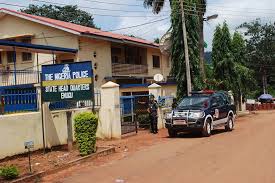 Two persons have been reportedly killed in a land dispute on Nkwelle Ezunaka Housing Estate in the Oyi Local Government Area of Anambra State.

Houses and vehicles worth millions of naira were also reportedly destroyed in the mayhem.

A 70-year-old woman and a middle-aged man were those killed in the incident.

The destruction was allegedly carried out by some people from a neighbouring village, who swooped on the estate with thugs.

A member of the family that claimed ownership of the land, Ikenna Okafor, whose property was burnt during the attack, said generations of his family had lived on the said land without molestation.

Okafor said, “The land in question is known as Nwobia. We have been living there from birth. Our forefathers lived there. Our family has been in possession of the land for many years.

“In 1922, our neighbouring community laid claim to it and we defeated them in a court judgment. Since then, peace had continued to reign until someone from our neighboruing village who is chairman of a vigilante group trespassed into the land. My uncle, who wanted to find out what was happening, was attacked and he later died.

“When we saw what happened, we rushed to the 3-3 Police Station, where we made an entry and the Divisional Crime Officer there mobilised his men to the site.

“When they got there, the police discovered that a large number of thugs had laid siege to our land. He assured us that the police headquarters in Awka would be contacted to invite the leader of the group, who was well known to the police circle because of his position as a local vigilante chairman.”

He said the thugs, however, continued the destruction with impunity.

“We ran away only for us to discover that all the vehicles there, including Hilux vans had been vandalised. As we approached our homes, we discovered that our houses were also destroyed.

“We have petitioned the IG and showed him all the destruction. Our tenants on the various estates whose houses were destroyed also petitioned the IG. The mother of one of the tenants was killed during the attack,” he added.

The Zonal Police Public Relations Officer, Zone 13, Nkeiruka Nwode, said she was not aware of the incident and promised to get back to our correspondent.

She never did as of the time of filing the report.