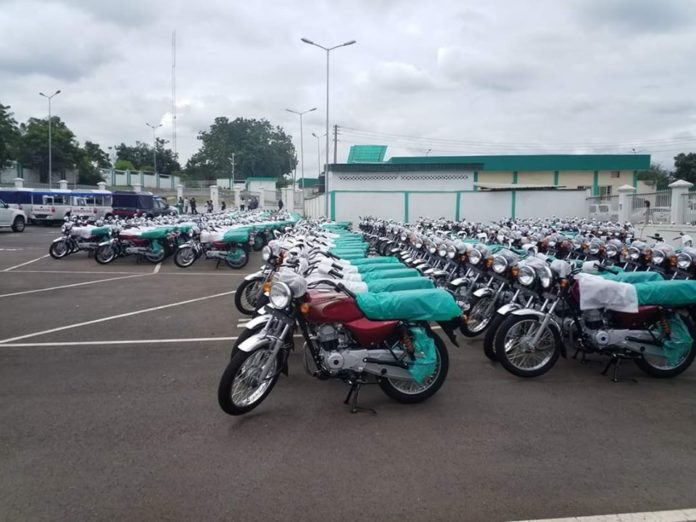 Succour came the way of 30 unemployed youths in Nsukka local government Area of Enugu state as they were given brand new motorcycles for commercial purposes by Governor Ifeanyi Ugwuanyi’s aide.
Hon. Ben Ugwoke a philanthropist and Senior Special Assistant to the Enugu State governor at the weekend at Adada house in Nsukka LGA gave out the motorcycles to the beneficiaries in a brief ceremony marking the phase one of the programme.
He said that the gesture was part of his effort to support jobless youths in the area and to reciprocate the trust the governor had in him by appointing him to serve in his administration as SPA.

According to him, “these motorcycles are brand new with plate numbers and complete particulars. I procured them for some of our people especially the youths who are jobless so that you will have something doing and stay away from crime and criminal activities.
“I am doing this to support Gov. Ifeanyi Ugwuanyi who gave me the opportunity to serve in his administration as Senior Special Assistant,” he said.
Hon. Ugwuoke urged the beneficiaries to make good use of the motorcycles to help themselves, their families and the society; adding that Governor Ugwuanyi’s administration is determined to better the lots of the youths in the area.
“All you need to have is patience, more good things are coming, if the motorcycle did not get to you this time, don’t panic more are coming. Just continue to give your support to Governor Ugwuanyi’s administration and you will never regret that you did,” he said.
In his remark, the Executive Chairman of Nsukka LG Hon Cosmas Ugwueze who was represented by his deputy Hon. Walter Ozioko described Hon. Ugwoke as a humanitarian and selfless giver.
“It is a thing of joy to see that we have someone who cares so much for the youths.
“I thank Governor Ugwuanyi for his wonderful aide who is using his position to transform people’s lives positively,” he said.
Mr Chika Nwaeze, Chairman of Commercial Motorcycle Riders Association in Nsukka LG who thanked Ugwoke for the motorcycles said that the gesture is a welcome development and first of its kind from governor’s aide.
“This is the first time an aide of a governor will give out motorcycles at no extra cost. With this the fortunes of many youths will automatically change for good.
“Extend our love and greetings to the governor who gave you the platform to serve in his administration and help the people,” he said.
Nwaeze urged the beneficiaries to keep to the term and conditions the motorcycles were given to them. He promised to integrate them in the Union as soon as they present themselves.
Also speaking Hon. Barr Agbowo Chinedu who prepared the motorcycles handover  documents said that the beneficiaries are expected to pay back the exact cost of the motorcycles after twelve months.
“By these documents you signed that gave you the possession of the motorcycle you are expected to pay back the exact cost of the motorcycles after one year.
“No extra charges is attached, as we hand the motorcycles over to you together with plate number, insurance paper, and other particulars. We wish you good luck.
“Endeavour to abide by the terms and the conditions attached,” he said.
Mr. Emmanuel Asogwa one of the beneficiary thanked Hon. Ugwoke for the kind gesture, stressing that “that is the mark of good governance and people-oriented leadership which the state in particular and Nigeria in general is yearning for.”
THE SUN, NIGERIA
Facebook
Twitter
WhatsApp
Email
Telegram
Previous articleOby Ezekwesili Demands Buhari’s Whereabouts Amid Protests
Next articleObiano Visits SARS Offices In Anambra, Frees Detainees