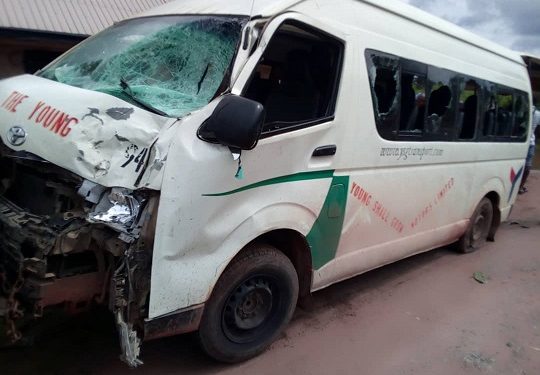 Two persons were killed after a driver with The Young Shall Grow Motors commercial vehicle crushed a motorcyclist and his three passengers along Owerri-Umuahia road in Oboama Nguru community in Aboh Mbaise council area of Imo State.

Two other occupants of the motorcycle, who were rescued from the scene of the accident, sustained varying degrees of injuries and have been taken to the nearby Adeniyi Hospital at Ahiara for treatment by emergency responders.

Village sources gave the names of the deceased as Joseph Amadi and Ifeanyi Madu while Vitus Anyanwu and Chinemerem Anyanwu sustained fatal injuries.

The accident, it was learnt, occurred at about 5.30 pm on Sunday as the bus and its occupants were coming from Abuja to Owerri.

It was gathered the bus driver attempted to overtake another vehicle at a bend just after Okwysco Feeling Station near Ahiara Junction and hit the motorcyclist and his three occupants.

The bus was said to have dragged the motorcyclist and his occupants to about 50 meters before pulling to a stop.

While the bus driver absconded after the accident, other occupants of the bus broke the window glasses of the bus to jump out.

When The Nation visited the scene of the accident on Monday, some police officers from Aboh Mbaise Police Division were seen towing the bus and motorcycle away.

One of the police officers, who preferred anonymity, said the driver immediately reported himself to the police and the culprit would be brought to justice.

An eyewitness, who also spoke on the condition of anonymity, attributed the accident to reckless driving.

He said, ‘It was reckless and dangerous driving that led to this accident. The driver apart from over-speeding on a narrow road like this also attempted to overtake another vehicle.’

‘The injured were rescued to Adeniyi hospital, Nnarambia Ahiara for treatment while the dead were deposited at a morgue,’ he explained.