HomePoliticsLet’s See Almajiris As Are Our Children – Okorocha
Politics

Let’s See Almajiris As Are Our Children – Okorocha 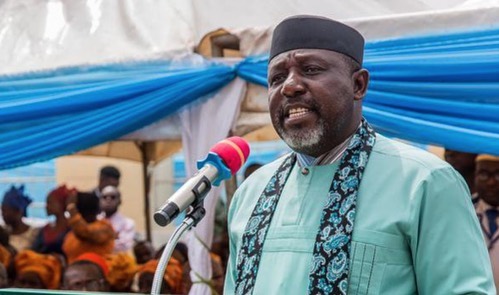 The senator representing Imo West Senatorial District of Imo State, Rochas Okorocha, on Saturday, made a strong case for almajiris, saying that they should be seen as human beings and children of all.

Okorocha, a two-term governor of Imo State stated this in an interview with journalists in Bauchi shortly after attending this year’s Maulud celebration of the Tijjaniyya Movement held at the IBB Square in Bauchi metropolis.

Read Also; What Has Uzodinma Done With ₦125.4bn Allocation – Okorocha

According to Okorocha, seeing the almajiris as our children and human beings is the best way to tackle the menace of almajiri in the country, especially in the Northern part of Nigeria.

He also called for the integration of the Arabic system of education with the conventional school system and empowerment of the almajiris.

‘I am calling on all and sundry, the rich and government to see what they can do to help the situation and to see how we can fight poverty together, and not blaming the children (almajiris) and making them become guilty of offences they didn’t commit because they did not bring themselves to this world.’

‘The best way to address the almajiria issue is first of all, the government must accept the fact that these almajiris are our children and once we accept that fact, then we have done 50 per cent of the job.’

‘Then we have to think about how to combine this school system, the Arabic schools, with conventional schools and empowerment.’

‘If they reach the age that they should go to farm there must be something they can do because I don’t think that there is anybody created by God that is useless. It is only when there is no idea that people look useless but there is no useless person in this world,” the former governor said.’

He informed that he attended the Maulud celebration, where he was conferred with the titles of Sarkin Yakin Talakawa and Garkwuwan almajairi, on the invitation of revered cleric, Sheik Usman Dahiru Bauchi.

‘I am in Bauchi on the invitation of Sheik Usman Dahiru Bauchi, who invited me for this year’s Maulud. I was given an award as Sarkin Yakin Talakawa by the Tijjaniyya and also the Garkwuwan almajairi (Ambassador of almajiris) and I think it has to do with my passionate appeal that the lives of the almajiris should be made better in this country,” he informed.’

Meanwhile, Okorocha has advocated an Igbo presidency in 2023 to give everybody a sense of belonging, saying that he stands for a united Nigeria, which he said is most important to him.

According to him, since other regions have produced the President of Nigeria, it would be good to allow an Igbo man to lead the country to see what it would look like.

‘Talking about the Presidency of Igbo extraction is rather to give everyone a sense of belonging but that is not doing the job.’

‘I think from that kind of Chelsea, Man U match kind of a thing, when they belong to the same country and they play matches, that’s exactly the way I see it, but it’s only fairness, fairness calls for that,’ Okorocha submitted.

He, however, noted that presidency is not about the title but getting the job done, adding that, ‘if you have a President and yet people are still hungry, people are suffering, of what use is that?’

Facebook
Twitter
WhatsApp
Email
Telegram
Previous articleOutrage Over Beating Of Catholic Priest In Ebonyi
Next articleEnd SARS: Your Voices Will Be Heard – Gov Ikpeazu To Protesters