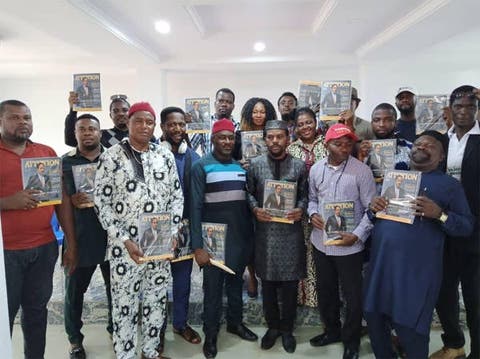 A nongovernmental organisation based in Anambra State, Godwin Maduka Foundation, (GMF) has received copies of Attention Magazine which was adorned on the cover with Dr. Godwin Maduka, a renowned international Doctor, philanthropist and Anambra governorship aspirant in the forthcoming 2021 governorship elections in the state.

The copies of the Magazine was presented to Barrister Kenneth Maduka, the Igwe elect of Umuchukwu community in Anambra state who is also the brother to Dr.  Godwin Maduka. The magazines were presented to the Foundation by the publisher and founder of Attention Magazine, Mr. Alex Nwankwo and his team in Anambra state yesterday.

Speaking with the publisher, Alex Nwankwo, the Igwe elect confirmed that copies of the Magazine will be distributed across all the local governments in Anambra State, as well as across all the traditional councils and palaces in the state. He also maintained that the activity was in view of supports for the devoted mandate and capacity of Dr. Godwin Maduka, as the next Governor of Anambra state.

The recently released edition of ‘Attention Magazine,’ extends critical considerations into the achievements, initiatives , visions and interventions of Dr. Godwin Maduka in Anambra State. His impact in the State evident across all industries, including his contributions in women empowerment, educational programmes, skills acquisition, security, sports, commerce and several other development areas.