Take Your Buses Back – Imo Workers To Gov Uzodinma 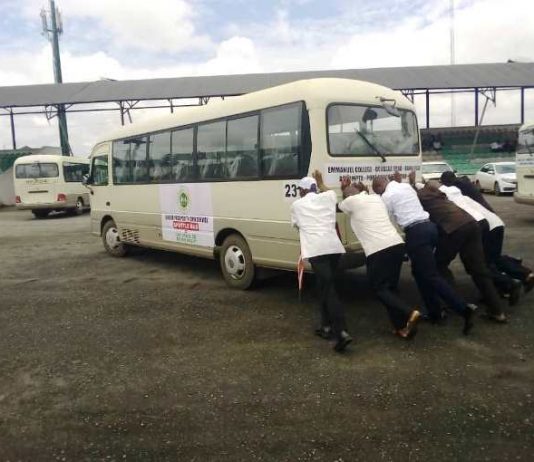 Since the Imo State Government through the Governor, Senator Hope Uzodinma made available to the civil service some staff buses, discordant tunes have continued to trail the provision said to be free of charge.

From what The Eastern Updates observed, the workers have started lamenting the deduction on their salaries after Governor Hope Uzodinma had promised it was going to be free of charge.
It would be recalled that Uzodinma had last month doled out buses to move the workers through and fro their homes to offices on workdays.

Read Also: Workers In Imo Cry Out As ₦3,000 Deductions For Free-Ride Begins

The rate at which workers thronged to use the free bus has reduced following discoveries that their monies were to be deducted from the monthly salaries paid to them.

After the bus donation, workers started using the vehicles until deductions on their salaries commenced at the end of month of September. Irked by the development, the workforce have sent out delgations to ask the Imo State government to withdraw the buses and allow them to undergo the initial process of public transport.

The workers have also started rejecting the morning snacks and free ride. They are crying to the Governor and asking him to withdraw the staff buses so that they can come to work on their own.

The workers have also vowed that from next month, no one will enter the staff bus again because they have discovered that it is a cunning Greek gift from the Imo State Government.