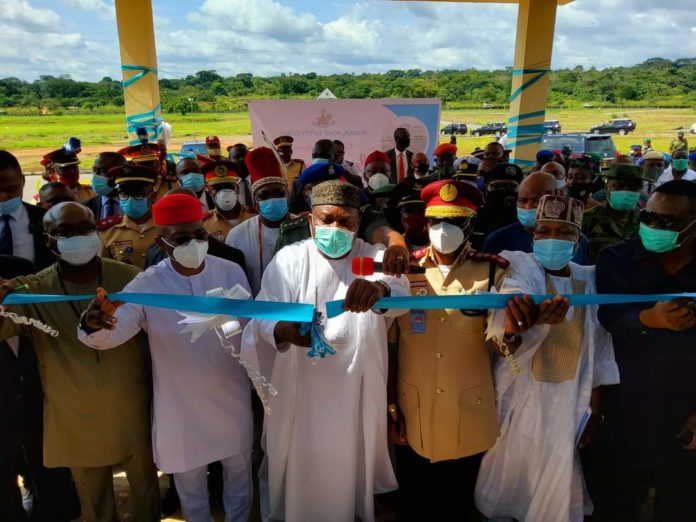 The federal government, governors of the Southeast geo-political zone and other stakeholders, have commended Governor Ifeanyi Ugwuanyi of Enugu State, for his administration’s commitment and uncommon support towards the completion of the Administrative Block of the Federal Road Safety Corps (FRSC) Academy, at Udi Local Government Area of the state.

The FRSC Academy which is a centre of excellence for the acquisition of skills in road traffic administration and safety management in Africa was relocated from its temporary site in Jos, Plateau State to Udi, Enugu State, in 2014, after the Enugu State Government gave the Corps 35 hectares of land and further committed to providing the internal road network in the facility as well as a befitting administrative block.

Speaking during inauguration of the administrative block, the Secretary to the Government of the Federation (SGF), Mr. Boss Mustapha, expressed the immense appreciation of the federal government to “the Enugu State Government, under the amiable leadership of His Excellency, the Executive Governor of Enugu State, Rt. Hon. Lawrence Ifeanyi Ugwuanyi for the show of uncommon support for the Corps”.

Mr. Mustapha told Gov. Ugwuanyi that “your goodwill and that of the good people of Enugu State is highly acknowledged by the federal government”.

Represented by the Director, PRS, Jamiu Adelabu Abdukalreem, the SGF, who expressed confidence that the establishment of the FRSC Academy in Enugu State will continue to aid the realization of the FRSC vision, added that the purposeful partnership with Enugu State Government in this regard “should, therefore, be emulated by other state governments, organizations and individuals to enhance the country’s road safety management efforts”.

Mr. Mustapha, therefore, reassured the people that the administration of President Muhammadu Buhari will continue to support all noble aspirations of FRSC, especially as it concerns the provision of adequate funding and necessary logistics for sustainable safety campaigns to rid the nation’s highways of road traffic crashes.

“This administration is equally poised to facilitate the leading role of FRSC in road traffic administration and safety management in Africa. On this note, I wish to convey the sincere appreciation of Mr. President, over the support of the state governments to FRSC, in various capacities. Similarly, I wish to call on members of the public to collectively take responsibility of safety awareness and key into road safety programmes to achieve a safe motoring environment in Nigeria”.

Earlier in his opening address, the Corps Marshal of FRSC, Dr. Boboye Oyeyemi, who also thanked Gov. Ugwuanyi for what his administration has done for the Corps, disclosed that the governor has agreed to provide additional land for the Academy for its proposed expansion.

Dr. Oyeyemi said that the governor on assumption of office demonstrated a renewed vigour to fulfill the pledge of the previous administration, stressing that “following the commitment of His Excellency (Gov. Ugwuanyi), fund was released to the Corps with the counterpart funding provided by the Federal Government to actualize this project”.

“I am short of words to convey the gratitude of the Corps to the Government and good people of Enugu State”, the Corps Marshal added.

In their goodwill messages, the governors of Imo, Ebonyi, Anambra and Abia states, who were represented at the event, respectively, applauded Gov. Ugwuanyi’s efforts, support and magnanimity towards the realization of the FRSC Academy project.

Inaugurating the project, Gov. Ugwuanyi who acknowledged the sacrifice made by the royal fathers and people of the three communities in Udi LGA that jointly own the parcel of the land where the academy is located, also commended the giant strides of the present leadership of the FRSC, in pursuing vigorously the provision of infrastructural facilities for the Corps which enabled the academy to move from the temporary site at Jos, to its permanent site at Udi.
The governor explained that the completion of the administrative block was a tasking demand on the state government’s meager resources on assumption of office.

“However, with the passion of our government for road safety and our synergy with the Corps as exemplified in the professional and technical support provided by the FRSC, through the academy, in the training of the staff of the Enugu State Traffic Management Agency and drivers of the Enugu State Government, we were encouraged to ensure the delivery of the project as earlier agreed”, the governor said.

Reiterating his administration’s commitment to good governance and safety, Gov. Ugwuanyi disclosed: “The Enugu State Government has prioritized road infrastructural development and maintenance of existing roads since the inception of this administration.

“We have improved on road furniture in all our roads and traffic lights within the urban areas. Our administration launched the State Traffic Management Agency to make our roads safer and more user friendly. We are conscious of the link between transportation and the economy hence the determination of our government to create a safe road system that will encourage economic growth and development”.

Enugu State is in the hands of God!#amokelouis